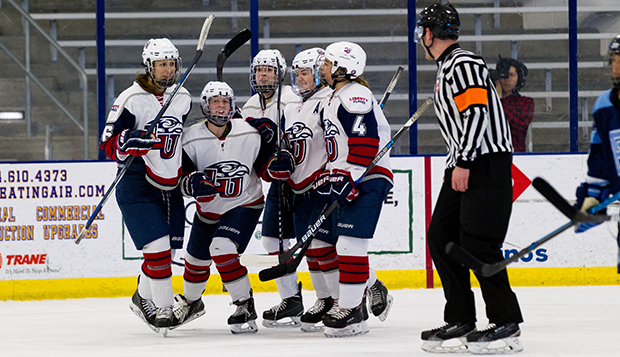 Liberty celebrates a goal against Rhode Island in Saturday's 6-1 win at the LaHaye Ice Center. (Photos by Gabrielle Calhoun)

"Both games were close after one period and we found ways to break them open with our offensive execution," Lady Flames Head Coach Chris Lowes said. "I liked our offensive zone possession. We were able to get the goalie moving to produce our goals with lots of tips, lots of rebounds, lots of screens."

Stationed in front of Rams standout goalie Abbey Torres, Liberty junior forward Deena Birney started the scoring with 7:32 left in the first period. She redirected freshman forward Aislyn Stretch's shot from the top of the left circle out of the air off her stick and into the back of the net.

The Lady Flames (9-1-2, ranked second in ACHA DI) added an unassisted goal with 47 seconds to go in the period when junior forward Shannon Fehr ripped a wrist shot from the center of the right circle into the upper netting.

Rhode Island (5-5, ranked ninth) put a shorthanded goal past Lady Flames freshman goalie Megan Peterson 12 seconds before the first intermission when Emma Hill won a faceoff in the defensive end and cleared the puck off the side boards right to Peterson, who let it slip under her stick, trimming Liberty's edge to 2-1.

Birney helped extend the Lady Flames' lead to 3-1 with a crossing pass from wide of the right circle to Machholz, who tipped the puck from point-blank range into the top shelf three and a half minutes into the second period.

Less than three and a half minutes later, Machholz padded Liberty's advantage to 4-1 by tapping the rebound of sophomore forward Danica Polson's shot from the slot through the five hole. Machholz scored her third consecutive goal — a natural hat trick — with a backhanded putback of Polson's shot from the left circle at the 8:37 mark.

"It was a big weekend for our orange line of Birney, Machholz, and Polson," Lowes said. "Machholz had the three today so with Polson's three (in Saturday's 6-1 win) and Birney scoring both days that's eight goals in two games for that line and that's a new combination. Credit (Assistant) Coach (Justin) Forth for finding some chemistry there."

With 9:06 remaining in regulation, Polson stretched Liberty's lead to 6-1 with a backhanded finish off assists from junior forwards Vanessa DeMerchant and Aly Morris. Finally, with 55 seconds to play, freshman forward Shelby Bradford assisted DeMerchant with a circle-to-circle feed from left to right across the slot and DeMerchant one-timed a slapshot past Torres.

"We had a few people out this weekend, so it was nice seeing people step up," Lowes said, noting that junior forward and leading scorer Alex Smibert missed both games with an upper-body injury.

Liberty hopes to have reinforcements back on the bench this coming weekend when it will play four games in three days in a home showcase. Liberty will play third-ranked Colorado — a team the Lady Flames defeated 12-1 in the semifinals en route to their second national championship last season — Friday at 7:30 p.m. and Saturday at 10:45 a.m. before taking on Davenport on Saturday at 8 p.m. and Penn State on Sunday at 1:30 p.m. 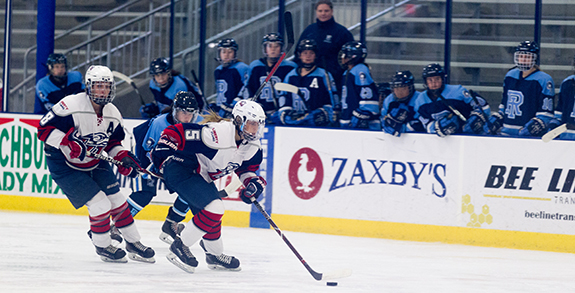 Shelby Bradford skates the puck along the Rhode Island bench alongside Vanessa DeMerchant.