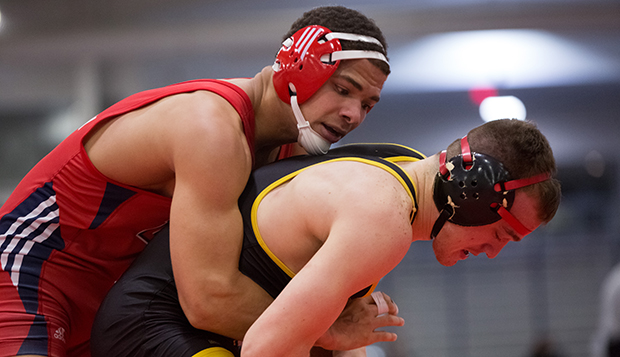 Andrew Burgette was one of the Flames' three consolation champions at Ursinus. (Photo by Nathan Spencer)

After edging Johnson for third place at last weekend's season-opening Messiah Invitational, Allen, who transferred from NCAA Division I powerhouse Virginia Tech over the summer, returned to Pennsylvania and came one step closer to his first tournament title. He earned a 15-4 major decision over Ursinus' Robert Fiedler before edging York's Joseph Soreco, 2-1 in overtime, to reach the semifinals, where he advanced to the championship with a 5-4 victory over the College of New Jersey's Thomas Marretta.

In the final, Worcester Polytechnic's Austin Shrewsbury claimed the crown with a 3-1 triumph.

Johnson, meanwhile, started by pinning Apprentice School's Peter Cortapasso in 6 minutes, 22 seconds, before Marretta sent him to the consolation bracket with a 4-3 overtime decision. Johnson wrestled back for four consecutive wins to clinch third place, starting with a 2-1 overtime decision over York's Thomas Tabatneck. He then recorded a 16-0 technical fall over Johns Hopkins' Henri Behaeghel before beating Ursinus' William McGinley, 9-2, and Marretta in a rematch in the third-place final, 5-1.

Burgette won his first two matches — by 15-2 major decision over York's Jackson Drum and 6-2 decision over Worcester Polytechnic's Chase Lind — before dropping a 7-4 decision to Jarrett DiGiantomasso, the eventual champion from Ursinus. In the consolation bracket, Burgette won two rematches, beating Drum before edging Lind, 3-1, in the final.

At 174 pounds, Liberty junior Sam Karel received a first-round bye and scored a 12-2 major decision over Worcester Polytechnic's Scott Rementer and an 11-7 win over Delaware Valley's Anthony Constanza before having to withdraw from his bout against Ursinus' Gary Nagle with an injury.

Liberty senior 184 pounder Cody Richmond won two matches — by 18-2 technical fall over Delaware Valley's Chris Mittler and by fall over Elizabethtown's Dayne Ross in 4:12 — before being eliminated in the consolation quarterfinals by teammate Josh McIlhenny, 6-0. McIlhenny was then ousted by Apprentice School's William Sorey, 8-5.

"It was a tougher tournament, but the team had more fight this weekend," Flames Head Coach Jesse Castro said. "It was a very physical tournament and the team wrestled and competed well."

Liberty will be back in action next weekend with some of its top wrestlers competing at the Joe Parisi Open, Saturday at Lindenwood University in St. Charles, Mo., and many others going to Roanoke, Va., to wrestle in the Star City Open on Sunday.