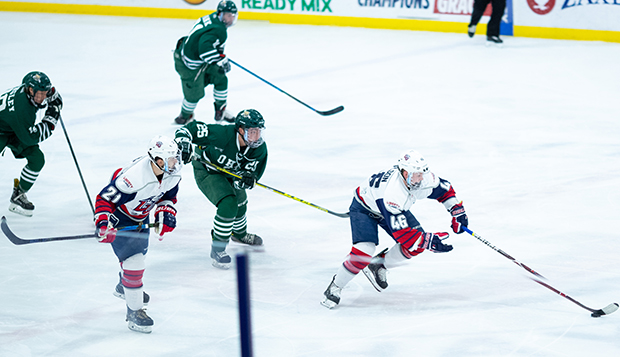 Sophomore forward Devin Pierce's game-winning goal as time expired in overtime sparked a delirious celebration inside the LaHaye Ice Center late Saturday night as Liberty University's ACHA Division I men's hockey team ended a 12-game skid against Ohio with a 3-2 triumph in front of a College For A Weekend (CFAW) crowd.

"It was an emotional roller coaster, that game, but it feels great to come out on top," Pierce said. "It was a battle and a great win for the guys."

"It was an exciting game," Flames Head Coach Kirk Handy added. "That's what the college hockey experience is all about, what we saw tonight, and it was fun to be a part of it. It's a big win for us as Ohio had had our number. Give our guys a lot of credit for coming back and regrouping in overtime and sticking with it."

After going zero for four on the power play in Friday night's opener, the Flames (11-3-1, ranked eighth in ACHA DI) capitalized on two extra-man opportunities and their penalty kill shut out the sixth-ranked Bobcats (9-2-1) — even on a five-on-three in the second period and a five-minute major in the third.

Liberty ended a 30-minute drought by scoring the game's first goal with a man advantage at the 10:24 mark of the second period. Junior defenseman Jacob Fricks received a pass from sophomore forward Cole Gammer in the high slot and fired a shot that skipped past Ohio goalie Jimmy Thomas as junior forward Quinn Ryan skated in front.

But Ohio struck right back, netting the equalizer with 8:41 to go when defenseman Nick Grose rocketed a shot from beyond the left circle that beat Flames senior goalie Cole Burack to the top left corner.

Then, 15 seconds after the Flames killed off a five-on-three penalty, the Bobcats converted the go-ahead goal at even strength when Garrett Jenkins fed linemate Bryan Lubin a pass from the back boards for a five-hole finish in front with 3:40 left in the period.

Revived and refocused to start the third period, Liberty countered quickly on junior forward Brock Thompson's fast-break shot from the right wing that deflected off Thomas's pads into the back of the net, evening the score at 2-2 with 18:29 to play.

"We had a really good push in the third period," Handy said. "We came out and scored with a bit of a break on that goal by Thompson — we put pucks on net and good things happened."

The Flames extinguished a five-minute major midway through the third period but could not capitalize on a power play of their own a few minutes later. The two teams played most of the last two minutes of regulation at four-on-four and neither managed to score, forcing five minutes of three-on-three, sudden-death overtime.

Liberty celebrated what appeared to be the winning goal with 2:34 remaining when Gammer tucked the rebound of Fricks' shot from the slot inside the left post. That goal was disallowed, however, because the goal came off its moorings a split second before the puck crossed the line.

The Flames played the last minute with a four-on-three advantage and cashed in for their second power-play goal in six chances. Pierce won the faceoff in the right circle and junior defenseman Chaydan Lauber launched a shot from the point that ricocheted off sophomore forward Jordan Bochinski to Pierce, right of the cage, where he slammed the rebound into an open net.

"We've seen a progression with our team, taking small steps to where we need to go and this was another step this weekend," Handy added. "Psychologically, it was a big-time win for us."

Liberty, which outshot Ohio, 42-31, will travel to New York to face ESCHL opponent NYU next Friday and Saturday. 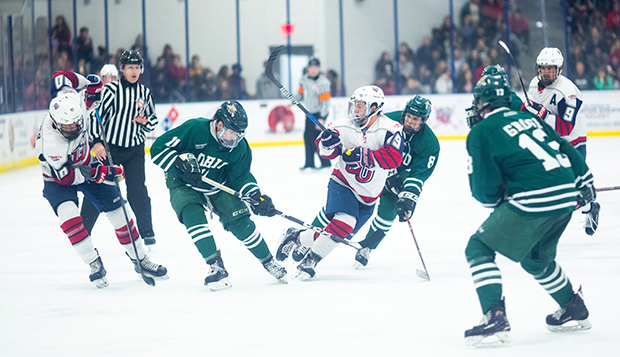