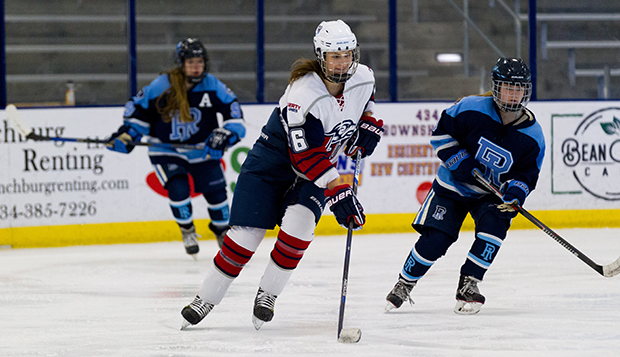 Liberty University's ACHA Division I women's hockey team outshot Rhode Island by a 54-16 margin in a 6-1 triumph, Saturday afternoon at the LaHaye Ice Center. It was the second win for the second-ranked Lady Flames (8-1-2) over the ninth-ranked Lady Rams (5-4) this season after winning the opener of the UMass Showcase, 4-0 on Oct. 12.

"Polson played well and all three lines produced so we're happy with it," Liberty Head Coach Chris Lowes said. "We put a lot of rubber toward the net and we cashed in."

Rhode Island capitalized on a Liberty turnover midway through the first period to take a 1-0 lead when top scorer Madison Balutowski (10 goals, 5 assists) broke out on a fast break and lifted a wrist shot from deep in the left circle into the upper netting, over the glove of Liberty junior goalie Nadia Rupoli.

The Lady Flames responded quickly with three goals over a span of 26 seconds with five minutes left in the first period to seize a 3-1 lead. Sophomore forward Shannon Fehr started the scoring flurry with an unassisted goal on a breakaway at the 5:47 mark, tying the game at 1-1. Polson then converted back-to-back goals off assists from freshman forward Grace Maccholz — with just seven seconds in between. She first pocketed a backhanded putback from near the left post off Maccholz's shot from the slot. Seconds after the faceoff, she one-timed her crossing pass on an ensuing rush for the 3-1 advantage.

"That was a good little stretch to just take control of the game and that was probably demoralizing for Rhode Island," Lowes said. "We spend a lot of time working on finishing our chances and when it happens, it's very encouraging."

Less than four minutes into the second period, senior forward Lauren McDonald extended Liberty's lead to 4-1 by finishing a rebound of graduate defenseman C.J. Tipping's shot from the top of the right circle.

With 4:09 left in the second, Polson's line went back to work. She and Machholz sparked a fast break that junior forward Deena Birney finished, putting away the rebound of Machholz's shot saved in front by Rams goalie Abbey Torres.

Late in the third period, Polson completed her hat trick with the Lady Flames on the power play as junior forward Aly Morris and Polson got sticks on McDonald's centering feed from the right corner and Polson sneaked it in through the five-hole for the final score.

Liberty and Rhode Island will meet again Sunday back at LaHaye, where the puck drops at noon.