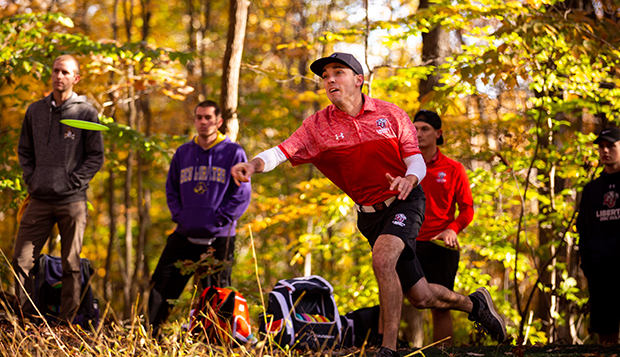 Flames graduate Jeremy Miekley tees off in singles play on the Hydaway course on Saturday. (Photos by Nathan Spencer)

For the fifth time in the seven years it has hosted the Flamethrower Invitational, a qualifier for the National Collegiate Disc Golf (NCDG) National Championships, Liberty University's men's championship flight was the overall team champion after Saturday's and Sunday's singles and doubles play on its two 20-hole courses near Hydaway Outdoor Recreation Center and on East Campus.

"These courses are tougher than what we will see at the National Championships," Flames Head Coach Steve Bowman said of the tournament set for March 27-30 at the Hippodrome Complex in North Augusta, S.C. "They are real comparable to what we played last weekend at the SECO Championships," the SouthEastern Collegiate Open in Appling, Ga., also won by the Flames' top foursome.

The reigning (NCDG) national champion Lady Flames' championship flight foursome also defended its Flamethrower team title, though its only competition was from its first flight team.

In the men's team competition, sophomore Trevor Staub, seniors Hunter Thomas and Ryan Shumate, and graduate Jeremy Miekley captured the crown with a combined score of 358 through two rounds of doubles and one round of singles play. That was 10 shots better than the Clemson championship flight foursome (368), which qualified its Division I and II teams for the National Championships.

Staub shot the low round of singles Saturday at the Hydaway course, firing a 60, followed closely by Shumate (61), and Thomas (62). The Flames' top doubles foursome also posted the low score of 61, one shot better than the DII team's round of 62.

"I had a tough start but made a lot of good putts to save par and it was a really good round for me," Staub said. "I struggled a lot in tournaments last year, but I've had two strong singles performances so far and I've got a lot of confidence right now."

Trotz won the singles title after carding a 110 total, followed by DII freshman Shannon Hons (116) and Alyssa Frye and Adkins (117), who tied for third.

Individual players from Liberty's men's and women's teams will sharpen their games through the rest of the fall and winter months by participating in the Blue Ridge Area Winter League (BRAWL) Series.