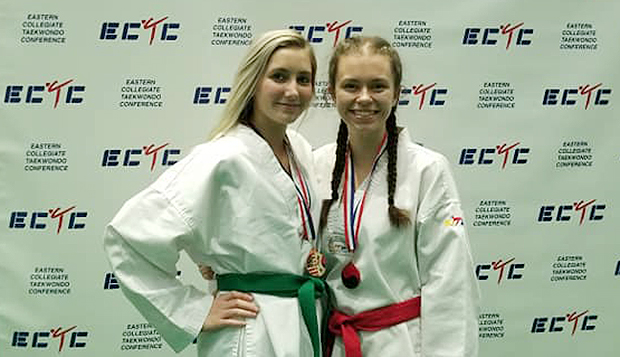 Freshman Lindsey Hudson (left) and junior Jacqueline Baumann each won their first three matches to advance to the semifinals.

Liberty University's taekwondo tandem of junior heavyweight Jackie Baumann and freshman middleweight Lindsey Hudson advanced to the semifinal round and captured a bronze medal in the women's B division of this past weekend's East Coast Taekwondo Conference (ECTC) tournament hosted by Cornell in Ithaca, N.Y.

As a women's duo competing against female trios from other schools (who also had lightweight competitors), both Baumann and Hudson had to win their matches in each round to advance from the round of 64 to the semifinals in the single-elimination, best-of-three format.

"We had three top-five finishes in sparring and it was excellent to have a team medalist, the highest finishing team we've had in an ECTC event," Liberty Head Coach Tom Childress said.

Overall, the Flames and Lady Flames, who brought a total of 18 men and women athletes in fighting and forms, were the Division III champions at the tournament, which drew a total of 23 teams and 350 competitors. Liberty started the competition ranked tied for fifth with Yale out of 17 schools in Division III. It won the second of five ECTC tournaments, beating runner-up Johns Hopkins and third-place Lehigh. Host Cornell strengthened its first-place Division I ranking while Northeastern closed the gap on Boston by winning Division II.

Freshman Elise Baldwin and senior Briana Bendon advanced to the round of 16 as another two-woman tandem.

On Oct. 26, Liberty hosted its second Atlantic Collegiate Alliance of Taekwondo (ACAT) tournament in three seasons at the LaHaye Recreation & Fitness Center, competing in a field of nine teams with a total of 85 competitors.

Teams were split between two divisions for schools with fewer than 10 competitors and those with 10 or more. Besides Liberty, top division schools included Virginia, Virginia Tech, North Carolina, and UMBC. From outside of the ACAT, the Naval Academy brought a complete team and Clemson entered one competitor. 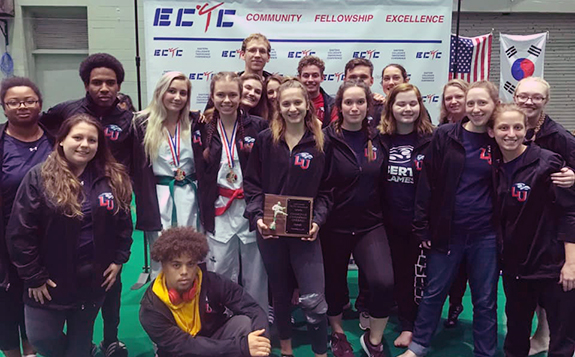