Flames place second in silver, tied for third in gold at JMU 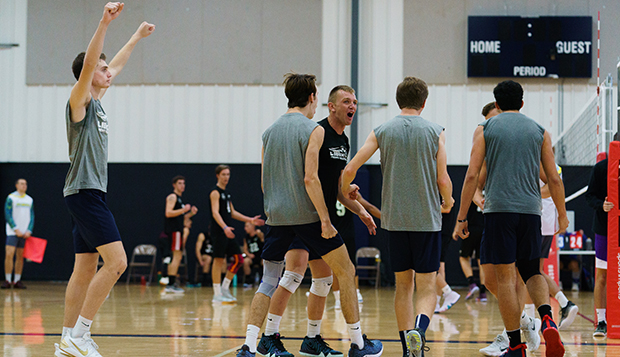 Liberty University's Division I and II men's volleyball teams advanced to the semifinal and championship games of the Gold and Silver brackets of Saturday's tournament at JMU, which featured a total of 20 teams. All but two were East Coast Volleyball Association (ECVA) rivals of the Flames, with the exceptions being the Gold bracket champion and runner-up — USA Volleyball club teams from New York and Northern Virginia, respectively.

Using predominantly reserve players through pool, play, Liberty's Division I team split two games with Pittsburgh before sweeping Division II teams from Penn State and Virginia Tech to finish 2-0-1 in its pool. In the playoffs, the Flames won a three-game quarterfinal against Penn State's DI team, 25-20, 23-25, 15-7, before falling to the Legion Volleyball Club (LVC) from New York in the semifinals, 25-17, 25-23.

"Our Division I guys haven't lost to a collegiate men's club team this season," Liberty Head Coach Bryan Rigg said. "Penn State was the best ECVA team we have faced this year and we were one step ahead of them. Then we gave LVC, the club team from New York that had finished fifth at USAV nationals, its best challenge of the day."

For the Flames, senior middle hitter Gene Dejesus (who hit at a better than .500 clip and averaged 1.5 blocks per game) and freshman opposite hitter Joshua Knapp were the two biggest impact players at the net with Dejesus leading the team in blocks and kills and Knapp a close second.

Rigg said the Flames as a team rose to the challenge against Penn State.

"It was a different type of game, higher intensity because they hit the ball hard, and the guys lit up," he said. "Their stat lines increased and their confidence in their abilities started to come out. They started to hit a little more aggressively."

After losing two of its three matches in pool play — defeating Radford and falling to Penn State's DI team and the USAV team from Northern Virginia — the Flames' DII men's team advanced to the silver bracket championship game with victories over VCU (25-17, 25-20) in the quarterfinals and Virginia Tech's DII team (25-21, 25-21) in the semifinals before losing to Penn State's DII team, 25-18, 25-22.

"Jared Patterson, our senior libero, played one of his best I've ever seen on defense and his serve-receive was solid," Rigg said. "He had a great weekend. He helped with his diving digs and started being a leader."

"He was really on," Rigg said. "He was playing aggressive and had a ton of kills through pool play and the playoffs."

The Flames will next compete Saturday at a tournament hosted by George Mason, an NCAA Division I team. There will be four pools of four teams, with the Flames placed in the same group as Eastern Mennonite, Marymount, and Mt. Olive (N.C.). Other schools in the tournament include a few teams Liberty has already faced, King University, North Greenville (S.C.), and Southern Virginia University.

"We are upping the level of play as we go on," Rigg said. "I think we can get out of our pool and get into the Gold bracket and see where fall if we play George Mason."