Liberty debuts USFSA structure to its Learn to Skate program 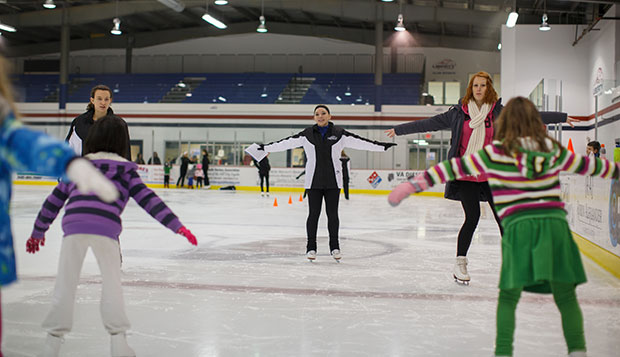 Enlisting the help of former U.S. Junior National Champion John Carlow, 15 members of the her figure skating and synchronized skating teams, and her assistants, Dawn Harter and Meghan Bower, Liberty University head coach Tatiana Payne welcomed 45 novice skaters from the community to the first of two Learn to Skate programs this past Monday, from 6 to 7 p.m. at the LaHaye Ice Center.

"Our goal is to eventually have 100 people in the program," Payne said. "We definitely have the support to get that big, it's just a matter of getting the word out and getting the people that are involved now to come back and keep going to new levels."

The hour-long program — working with beginning skaters the first half hour and those with experience the second half hour — runs for six consecutive weeks through Feb. 25 with a second session set for March 18 through April 29.

Previously, the Learn to Skate program, also open to ice hockey players looking to polish their skating skills, was run through the Lynchburg Figure Skating Club.

"We've just been talking over the last year, trying to figure out how to build up the skating program here, how to get more people involved," Payne said, noting the Lynchburg club ran out of resources to continue the program the same month she and Carlow were discussing how to go about starting one up. "He's got tons of experience. He used to run a rink in Raleigh (N.C.) and was in charge of their Learn to Skate program and now it's pretty booming."

Most of the members of Payne's two teams, including Kelly Pollock, a senior level skater who helped Carlow, and Fantasia Remonvil, who has passed her junior level testing and instructed the adults on Monday, have backgrounds in coaching as well as competing in the sport.

"I would say at least 75 percent of the girls out there have experience teaching, so that's good," said Payne, a USFSA gold medalist in moves in the field and freestyle.

However, none are as experienced as Carlow, who learned to skate at the age of 18 months, received the first perfect score at a World Professional Championship event, and toured professionally in shows with Holiday on Ice and Torvill and Dean. He taught in Australia for 10 years before returning to Virginia and coaching in the Raleigh and Greensboro, N.C., areas, visiting LaHaye every week to professionally sharpen figure skaters' skates.

"He started giving lessons here, probably about a year and a half ago, on and off, working with Maya (Carter)," Payne said of a budding figure skating star from Lynchburg who is one of the only girls in the area landing a triple lutz. "Then, he started doing some other lessons with some of the Liberty girls, occasionally."

Carlow, a USFSA triple gold medalist in freestyle, figures and moves in the field, specializes in jumps and has worked with members of the Flames on their leaps, using a harness to lift them into the air.

"He and I teach very similar technique, so when I do a clinic or when I do a camp, I like bringing him on because he's got really good ways of instructing," Payne said. "Having him on board has been such a huge asset because … he's just got a lot of experience and skating kind of runs in his family. His dad was a champion, too."

"The U.S. Figure Skating basic skills is a structure that's been around for a really, really long time and it's very successful," Payne said. "I did it when I was a little kid. (Carlow) did it when he was a little kid, so it's been proven to a pretty successful program … and our skating teams are also USFSA-based and not ISI-based. It's just a more competitive track, so that's why we decided to go that route."