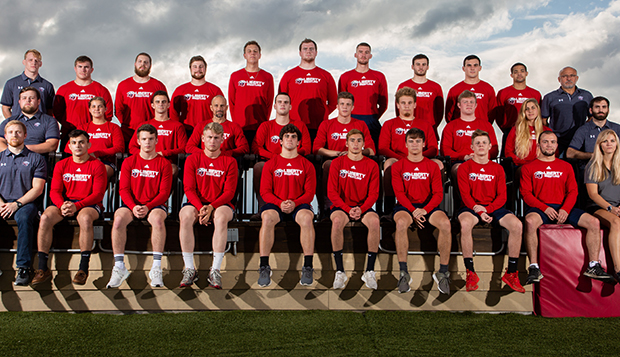 Flames Head Coach Jesse Castro is eager to see his wrestlers step up to the challenge of competing against predominantly NCAA Division III competition in the 15-team tournament. Besides host Messiah, a few of the top teams in the field include Wheaton (Ill.), Lycoming (Pa.), and Gettysburg (Pa.).

"This is the beginning of our season, where we set the pace in every way — not just physically but spiritually as well," Castro said. "We will take multiple wrestlers in each weight class and provide an opportunity for them to prove themselves."

In the NCWA preseason rankings, Liberty is ranked second behind The Apprentice School, the Mid-Atlantic Conference rival that the Flames edged by one-half point at the March 10 NCWA Grand Nationals in Allen, Texas. Liberty will compete against Apprentice for the first of four times this season at next Saturday's Ursinus (Pa.) Fall Brawl Open near Philadelphia. Future showdowns with the Builders will occur at the Feb. 2 NCWA National Duals in Las Vegas, the March 2 Mid-Atlantic Conference championships, hosted by the seven-time defending champion Flames, and the March 14-16 NCWA Grand Nationals, back in Allen, Texas.

"They have a really nice team with everyone returning in their lineup," Castro said. "It's going to be a dogfight, just like last year's national tournament was."

Individually, senior captain Dominick Johnson is the Flames' only wrestler ranked No. 1 — at heavyweight. Senior Austin Amos, who won the 235-pound final with a last-second reversal to lift Liberty to the dramatic team triumph at nationals, is ranked second at 197 pounds, behind only Apprentice's defending champion Ross Graham.

The Flames' lineup gets stronger as dual matches progress through the 11 weight classes.

"As far as our depth goes, we are good in the middle to upperweights," Castro said. "Down low, we are very, very thin."

Liberty will get its first look at a handful of promising freshmen in Saturday's tournament — from Bobby Leek at 133 pounds up to Jeffrey Allen at 235 pounds, a sophomore transfer from Virginia Tech.

At 125 pounds, the Flames welcome back graduate student Jeff Lester, 52, who wrestled for Castro in the mid-1980s and has one season of eligibility left as he pursues an online master's degree in business.

Lester, who was recruited by founding Head Coach Bob Bonheim as a state champion out of West Virginia, left the program in 1988 before returning to Liberty to complete his undergraduate degree in 2000. He currently owns an insurance company business in West Virginia and conducts his business online from Lynchburg.

"The kids are embracing him and treating him like any other student-athlete," Castro said. "He has been coaching at the high school level for several years, so we have to remind him he's not a coach, but an athlete."

Castro is hopeful in the spring semester that Tyler Sigler, an all-American last season at 133 pounds, will return to the team and L.J. White, who is enlisted in the U.S. Army reserves this fall, enrolls at Liberty, strengthening the Flames in the lightweight classes.

In the middleweights, Liberty will look to generate momentum from 149-pound sophomore Chad Cantrell, returning junior All-American Andrew Burgette at 157, sophomore David Cox at 165, and juniors Luke Ely and Sam Karel at 174.

"We are relying on the chemistry of the team, which is where it needs to be right now," Castro said. "We want to keep building on that, developing that closeness, keeping them motivated, and hopefully bringing it to a crescendo when we need to peak in the postseason."