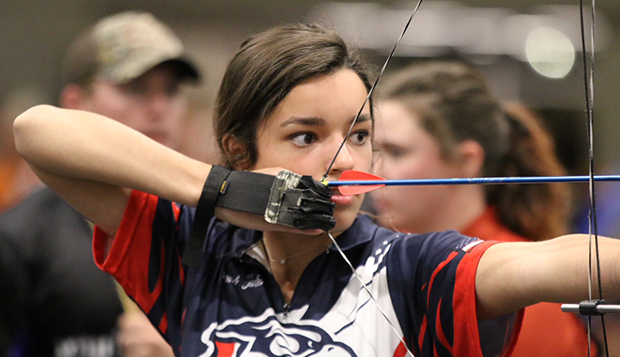 Fourteen members of Liberty University's men's and women's archery teams competed for the first time in the USA Archery 3D National Championships, hosted by the Archery Shooters Association at Graham Creek Nature Preserve in Foley, Ala.

The Flames and Lady Flames were competing against a deeper field than last year, when they won the men's bowhunter team title at the United States Collegiate Archery (USCA) 3D National Championships in Illinois. The USCA merged with USA Archery over the summer, and the USA Archery 3D Nationals increased from 75 competitors in that event's inaugural year last fall to 340 this past weekend.

"It was a good showing, all things considered," said Liberty Head Coach Ian Rigney. "They were ready for it. They thoroughly enjoyed the setup and the venue."

"This was her first 3D competition after shooting archery just to bowhunt before, so we were very happy with that," Rigney said. 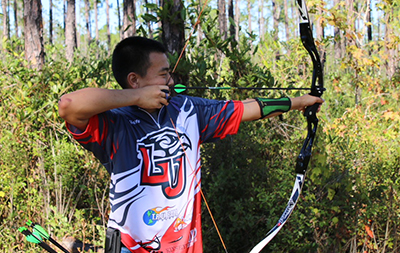 Senior Louis Boyd placed ninth out of 55 archers in the men's compound division and freshmen Emma Suggs and Hala Skelton posted 10th- and 11th-place performances in the women's compound.

Boyd and Suggs placed fourth in the mixed compound competition, losing a tiebreaker for third with Emmanuel College.

After shooting a round of 214 on a 20-target course Saturday morning, Boyd was in sixth place in the individual event, 10 points out of first, but he slipped three spots after firing a 208 on Saturday evening.

Suggs was only three points out of the lead after shooting a 208 in the morning session before firing a 196 in the evening round for a 404 total that landed her in 10th-place out of 37 archers. Skelton finished five points behind Suggs at 399.

Freshman Conner Rothermel finished seventh out of 11 archers in the men's recurve event.

Graduate student Jason Lynch, who, like Boyd, was part of the Flames' men's bowhunting championship trio last season, didn't fare quite as well individually, finishing 19th out of 80 archers with a score of 391.

The Lady Flames entered a complete bowhunting team, with junior Emily Mullins placing 41st and Kaylee Martin 45th out of 67 archers in that division.

In Sunday's team competition, Liberty's men's compound trio was seeded eighth out of 18 teams but was eliminated by Union College in the first round, losing by nine points.

Liberty's men's barebow team of Underhill, Blanthorn, and Tabor was seeded fourth and was upset by Hocking College's fifth-seeded trio by 11 points in the first round.

"We've got a lot of potential, with about half-and-half as far as freshmen and seniors on the team and not many in-between," Rigney said. "We will be an even younger team next year, when we want to go back and reclaim our title."

For now, the Flames and Lady Flames will shift their focus to the USA Archery Indoor Nationals, hosted by JMU in Fishersville, Va., from Feb. 14-17. 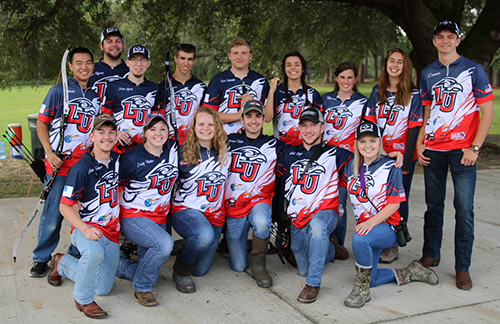