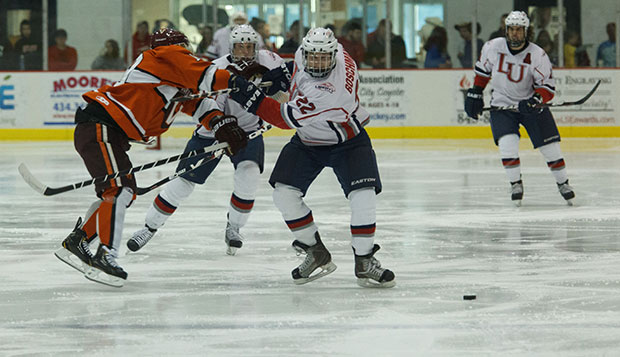 Two weeks after staging dramatic third-period comebacks in a two-game sweep of Arizona in Tucson, Liberty University's men's hockey team hosts the Wildcats this Friday and Saturday at 7 p.m. in an ACHA rematch at the LaHaye Ice Center.

The Flames are riding a five-game winning streak, which started with a 7-6 triumph at AU on Jan. 11, when they scored five third-period goals, two by Ryley Egan, to erase a 5-2 deficit. Their recent run of success continued with a 7-5 come-from-behind win over the Wildcats on Jan. 12, when they used a hat trick by Luke Baumgarten and a goal and three assists by Brent Boschman to open an early 3-1 lead and rally from a late 5-4 deficit.

Liberty Scouting Report: Senior forward Rick Turner, who scored the go-ahead goal and assisted the final score in the Flames' 5-2 victory over rival Virginia Tech this past Sunday at home, ranks fourth in the ACHA in points with 58 and second in goals with 34, adding 24 assists. Egan (12 G, 22 A) and Lindsay LeBlanc (14 G, 22 A) are the Flames' next highest scorers with 34 points apiece. Turner and Egan are tied for 18th in the ACHA with six power-play goals.

Goalie Clayton Brown (3.62 goals-against average, 88 save percentage), who leads Liberty with two shutouts, allowed just three goals in two games over the weekend — 4-1 and 5-2 wins at West Virginia and at home against Virginia Tech, respectively, — to raise his record to 8-5-1. Blair Bennett (3.14 GAA) is 9-5 after recording a 6-1 win at West Virginia last Friday and has saved 90 percent of opponents' shots on goal.

Arizona Scouting Report: Like the Flames, who won their first eight games before losing eight of their next 10, the Wildcats have been somewhat streaky this season. Arizona followed a five-game winning streak to end 2012 and start 2013 with six straight losses before edging fifth-ranked Oklahoma, 4-3, in a shootout this past Saturday at home. The Wildcats have lost all four games this season against top-ranked rival Arizona State, which extended its winning streak to 28 games against AU.

Brian Slugocki (21 goals, 20 assists) and Ansel Ivens-Anderson (20 G, 21 A) are tied for Arizona's scoring lead with 41 points while Andrew Murmes, who is tied for the ACHA lead with six game-winning goals and has distributed a team-high 26 assists, ranks a close third with 40 points.

Slugocki also ranks second in the league with 10 power-play goals.

All-time series: Liberty is 4-0 against Arizona including a sweep of the Wildcats in the teams' first two-game series in 2006 and the Jan. 11-12 sweep at the Tucson Convention Center.

Coaches: Kirk Handy, who missed Liberty's road trip to West Virginia last weekend to attend to his wife, Jannie, who gave birth to the couple's fourth child on Jan. 17, is in his 13th season as the Flames' head coach. He boasts an overall record of 273-117-14, with assistant coach Jeff Boettger credited with the two wins over the Mountaineers. Arizona's Sean Hogan, a former player and coach at Oakland, which visits Liberty Feb. 8 and 9, is in his second season as head coach of the Wildcats with a 25-35-1 mark.