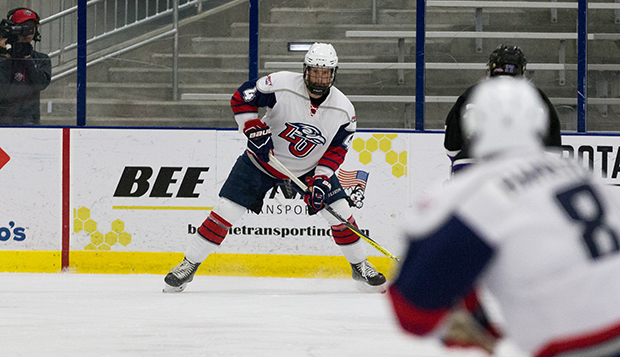 A four-goal flurry over a four-and-a-half minute span late in the second period turned a 2-1 battle between top-ranked Adrian College and Liberty University's ACHA Division I men's hockey team into a blowout for the defending national champion Bulldogs in Friday night's opener at Arrington Ice Arena, an 8-2 setback for the Flames.

"They scored two goals in four on four, one on the power play and one shorthanded, so it was a little bit of everything," Liberty Head Coach Kirk Handy said. "There were times where we played the type of hockey we wanted to play and times where we were chasing the puck."

Adrian (7-0-0) stretched its winning streak to 27 games and is now 42-0 on its home ice over the past three seasons. It struck first on Joe Costello's putback five minutes after the opening faceoff before tacking on a second score midway through the second period on a breakaway by Chris Donaldson, who beat Flames senior goalie Cole Burack through the five-hole.

Liberty (8-1-1), which was only outshot by a 41-29 margin, cut the Bulldogs' lead to 2-1 exactly two minutes later when sophomore forward Cole Gammer made an incredible deflection of a shot rocketed from the high slot by junior defenseman Jacob Fricks.

But things unraveled quickly for the Flames as the period wound down, starting with Costello's second score unassisted at the 5:00 mark. That was the first of six consecutive Adrian goals before Liberty junior forward Brock Thompson stemmed the tide with 2:35 remaining in regulation, finishing linemate Quinn Ryan's second assist.

"We had a bunch of turnovers and were giving them way too many odd-man rushes up the ice," Handy said. "We can't continue to do that and be successful. That's an area of our game we want to make sure we clean up (in Saturday's rematch). We need to reset and come back ready to play for 60 minutes."

He said Liberty needs to prevent breakaway opportunities and strike quickly and repeatedly on their own fast breaks and power plays.

"With teams like this, you can't take your foot off the gas pedal," Handy said. "We know that we've got a good team. We definitely need to learn from this game tonight and be better."

Liberty's second game at Adrian will be webcast live on Saturday at 3 p.m., following the Lady Flames' noon rematch with the Bulldogs.