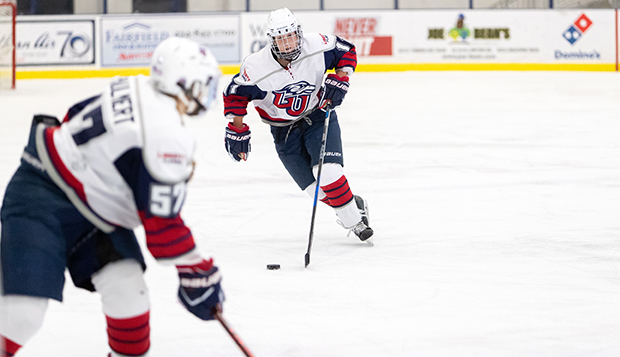 After debuting at No. 3 in the first ACHA Division I women's hockey computer rankings, Liberty University's defending national champions opened this weekend's three-game road trip with a 10-1 triumph over 11th-ranked Michigan on Thursday night. Liberty (8-0-1) is ranked only behind Colorado (7-0) and McKendree (6-1).

The Lady Flames' top line of juniors Alex Smibert (four goals, one assist) and Aly Morris (1G, 3A) and senior Lauren McDonald (3A) accounted for five of their 10 goals against the Wolverines (1-4) at Yost Arena.

"That line was really productive for us, and made the most of its chances," Liberty Head Coach Chris Lowes said. "As a team, we went two-for-two on the power play so we took advantage of our opportunities and definitely dominated possession of the puck."

More impressively, the Lady Flames did not get called for a single penalty over the 60-minjute contest.

Smibert netted the only two goals of the first period, the first assisted by junior forward Deena Birney and sophomore forward Shannon Fehr with Liberty on the power play just two minutes after the opening faceoff.

Michigan cut the deficit to 2-1 just over three minutes into the second period before junior defenseman Rachel Gibson converted the Lady Flames' second power-play goal, set up by Morris and junior forward Vanessa DeMerchant, to stretch the advantage to 3-1 at the 11:31 mark.

Liberty doubled its scoring output with three goals in a span of less than two and a half minutes, sparked by Morris off assists from McDonald and Smibert with 9:55 left. Sophomore forward Danica Polson padded the lead to 5-1 by putting away a pass from graduate defenseman C.J. Tipping at 9:07 before Smibert notched her hat trick by finishing feeds from McDonald and Morris.

Finally in the third, the Lady Flames added four more in fairly rapid succession, starting with Smibert's fourth score, again off assists from both of her linemates. DeMerchant netted two of the last three goals, both set up by freshman forward Grace Machholz, with junior forward Tiana Lisle converting a pass from sophomore defenseman Kristi Serafin on the ninth goal with 9:05 to go.

Liberty outshot Michigan, 57-18, and junior goalie Nadia Rupoli made 17 saves to improve to 4-0 with a 0.75 goals-against average and 96.6 save percentage.

"The girls had a good night," Lowes said, noting that it was an excellent tune-up for Friday's 3 p.m. opener at No. 5 Adrian College. That will be a rematch of the 2018 ACHA DI National Championship game won by the Lady Flames. "Both teams will be excited to get back on the ice and it's going to be a good test. We'll have a quick turnaround, but it was good to get up here to Michigan, to get our legs under us, and hopefully get a good night's sleep. The girls will have a lot of energy and adrenaline and be ready to go."

Liberty's ACHA DI men's team will challenge top-ranked, defending national champion Adrian for the first time on Friday at 7 p.m. Saturday's women's game is set for noon, ahead of the Flames' rematch with the Bulldogs at 3 p.m.