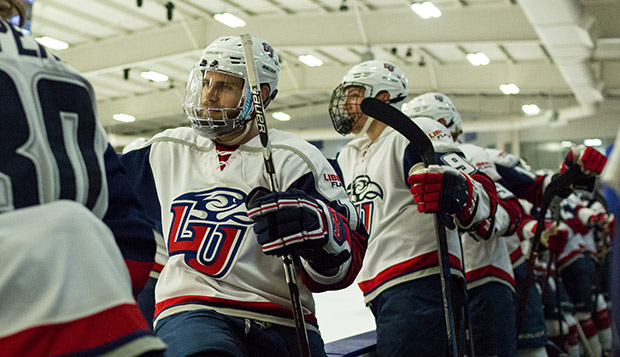 In a rare doubleheader on the road, both Liberty University's ACHA Division I men's and women's hockey teams will challenge Adrian College on Friday and Saturday in Michigan in a high-stakes series with the Bulldogs. While the reigning national champion Lady Flames (7-0-1) may be favored in their ACHA DI title game rematches, the men's team, ranked fifth in this week's ACHA coaches poll, will be decided underdogs; top-ranked Adrian is coming off its first national championship and riding a 26-game winning streak.

"It's the opportunity that you're always looking for," Liberty men's Head Coach Kirk Handy said. "We're looking forward to it, and we'll embrace the opportunity. We're excited and hope to continue moving through the season and get better each and every night out. For us, it's about executing."

The teams can anticipate an energetic crowd for Friday's 7 p.m. opener as it will be Fraternity Night at Adrian's Arrington Arena.

"It's going to be fun," Flames sophomore forward Devin Pierce said. "Our goal we set is top five in the nation, so right now we're sitting right there. Hopefully we can jump on them quick and kind of surprise them. Using our speed is going to be huge and really just playing our game."

All-Time Series: Adrian holds a 3-0 lead in the series at the ACHA Division I level after sweeping Liberty in 2010 and eliminating the Flames from the ACHA DI National Championships in 2012.

Liberty Scouting Report: The Flames are coming off perhaps their best contest of the season, a 5-0 shutout of New York University.

Liberty's lightning-like attack is sparked by junior forward Quinn Ryan, who paces the Flames with an even 10 goals and 10 assists. He is complemented by junior defenseman Garrett Nelson, who has distributed 13 assists.

Handy said it will take contributions from everyone in the lineup to upset the Bulldogs on their home ice.

Adrian Scouting Report: The defending ACHA Division I men's hockey national champion Bulldogs ended the 2017-18 season on a 20-game tear capped by their first-ever crown. Adrian was dominant in that tournament, outscoring its four opponents by a 21-4 margin. Over the past two seasons, the Bulldogs are 41-0 on their home ice at Arrington Arena in Adrian, Mich., including 8-1 and 10-2 routs of Alabama last weekend.

Costello is one of four Bulldogs to reach double digits in points with six goals and six assists. He trails only Brendan Stanko (6G, 8A) and is tied with Mark Fratarcangeli (6G, 6A) and Marcus Rose (5G, 7A).

Adrian has had six different players score game-winning goals in its six victories this season.

Coaches: Handy is in his 19th season as Liberty's head coach and has compiled an overall record of 413-172-27. Adrian is led by reigning ACHA Division I Coach of the Year Gary Astalos, who is now 73-4 in his third season at the helm. He guided the Bulldogs to back-to-back Great Lakes Collegiate Hockey League titles followed by a fourth-place showing in the ACHA DI National Championships in 2016-17 and national title in 2017-18, when they finished 34-1.