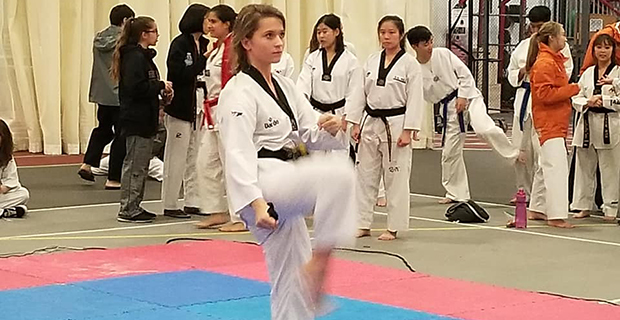 The event featured more than 450 competitors from 32 schools, including a number of Ivy League schools and the U.S. Military Academy. Nearly all belt categories and weight classes were organized into 64-athlete brackets.

The Lady Flames put together three-women A and B division teams that advanced to the round of eight before finishing in four-way ties for fifth place. Liberty's A Division team composed of seniors Sadie Newton and Tyler Creese and junior Shelby Wilson won at least two of three bouts in the first three rounds before losing to Brown in the quarterfinals.

Liberty's women's B Division freshman trio of Sarah Rotter, Lindsey Hudson, and Abigail Faber also advanced through three rounds before being eliminated one win short of the medal round.

Liberty also had a two-woman team make it to the round of 16 in the A Division, with Head Coach Tom Childress promoting freshman red belt Tessa Wamsley up to the black belt division to join junior second-degree black belt Brittany Harris, "to expand her horizons and let her see what competition is like at the next level," Childress said.

Freshman Laura Western and junior Jackie Baumann, who was promoted to red belt this semester, reached the round of 16 in the women's B Division.

"They did a great job and we had some really great showings considering all of women's B teams were competing in taekwondo for the first time," Childress said. "They were doing really well against some of the best teams in the country."

The Flames entered one men's A division team, made up of junior Will Parker, senior Thomas Siff, and freshman Joey Carl, who lost to the eventual champions from UConn in the round of 32.

Liberty also got wins from four of its six single competitors in their respective brackets — sophomore black belt Joseph Tapia in the B Division and freshman Teagan Molinets, senior Briana Bendon, and Caleb Perdew in the C Division.

Team members helped out in running the tournament when they weren't competing.

"I was really proud of the way we performed this weekend," Childress said. "They showed a wonderful spirit of volunteerism, helping to fill in as corner judges. They did such a great job of coming together and supporting one another."

The Flames and Lady Flames will host their first Atlantic Collegiate Alliance of Taekwondo (ACAT) tournament since 2016 this Saturday on six mats set up on three of the LaHaye Recreation & Fitness Center's seven basketball courts. Childress is expecting approximately 100 competitors from as many as 12 ACAT schools and the Naval Academy.