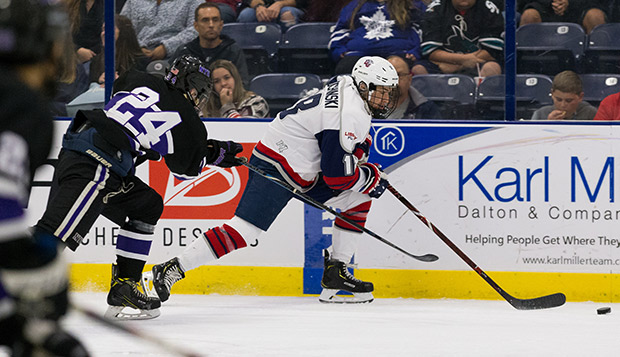 After being held scoreless for the first period of Saturday night's rematch with New York University at the LaHaye Ice Center, Liberty University's ACHA Division I men's hockey team manufactured three goals in the second period, capitalizing on its second power-play goal in the final five seconds to seize a 3-0 lead.

"Our power play and penalty kill were fantastic tonight and that was a key part of our victory," Flames Head Coach Kirk Handy said, crediting Assistant Coach Daniel Berthiaume and Associate Head Coach Jeff Boettger, respectively, who work with those two units.

Liberty outshot NYU 44-19 and senior goalie Josh Halpenny posted his second shutout in three starts, lowering his goals-against average to 0.33 and improving on his 98.0 save percentage. Though he didn't face a barrage of shots, he was up to the task every time, killing a few penalties with clutch saves in the third period.

"He's playing amazing right now and we're really proud of him," sophomore forward Devin Pierce said. "The way Halpenny and (senior goalie Cole) Burack are playing for us is huge for us."

Pierce ended the scoreless tie with the Flames on a man advantage at the 13:49 mark of the second stanza, skating onto an outlet pass from junior defenseman Jacob Fricks near the red line and accelerating past Violets defensemen in the slot before tucking a backhanded shot under the pads of goalie Adam Salisbury for what proved to be the game-winner.

"It was good to get the guys going (and) a good heads-up play by Fricks there," Pierce said. "We didn't know if we were going for a line change there but we saw some ice and an opportunity to skate the puck through it."

Moments after another Liberty power play expired, sophomore forward Cole Gammer started another fast break with a pass to junior forward Brock Thompson who skated the puck into the offensive zone. Flames defenseman Matt Cruickshank was taken down along the left boards, but Thompson was able to dig the puck out of the left corner back to Gammer in the left crease, where he scooped a backhanded shot past Salisbury with 8:17 left in the period.

The Flames, who started the period with more than a minute left on a power play, went back on the man advantage for the final two minutes. However, it appeared they would let the chance go to waste as the clock wound down before junior forward Quinn Ryan coolly skated the puck back through the high slot and caught Salisbury off guard by unleashing a fade-away forehand wrist shot that veered inside the lower right post.

"We're trying to get that (power play) rolling going into next weekend's series at Adrian," Pierce said of the top-ranked, defending national champion Bulldogs. "When the penalty kill is going and the power play is on, especially against these good teams, special teams is going to be huge."

Finally, in the third, Liberty expanded its lead to 4-0 with 9:01 remaining in regulation when Gammer flicked a pass through the left circle down to sophomore forward Jordan Bochinski who skated along the end line toward the left post and tucked the puck under Salisbury's pad.

With the Flames back on the power play for the final 1:42, Gammer quickly iced the victory with a slap shot from the left wing after receiving Ryan's return pass from the left corner.

Action on the ice became increasingly physical as the Violets sensed the game slipping out of their hands. NYU was penalized 15 times, five more than Liberty, and its bench nearly started a fight with Flames junior forward Victor Blomberg in the final few minutes.

"Coach Handy was saying, ‘Stay out of it,'" Pierce said. "‘Think about Adrian next week. We need everyone out there on the ice. Don't do anything dumb.'"

The one-sided win gives fifth-ranked Liberty momentum going into next Friday's and Saturday's games in Michigan.

"It's going to be fun," Pierce said of taking on Adrian on its home ice. "We're really excited for the opportunity. Our goal we set is to finish in the top five in the nation, and right now, we're sitting right there, so hopefully we can keep that going. We need to get some rest here and go up there, use our speed, and play our game. Hopefully, we'll jump on them quick and kind of surprise them."

"It's the opportunity that you're always looking for and we're going to embrace it," Handy added. 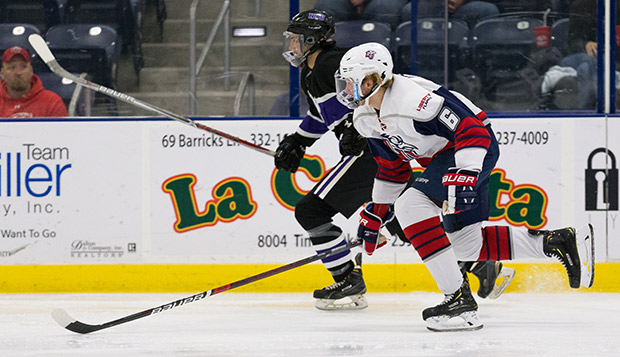 Junior defenseman Jacob Fricks chases after the puck along the boards beside an NYU player.