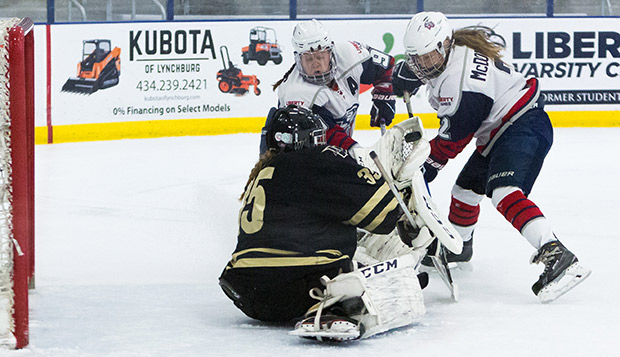 "It was a good game, a good weekend for us," Liberty Head Coach Chris Lowes said. "The trip served its purpose. We had quite a few special teams opportunities both last night and tonight, so we got some really good reps both on the power play and on the penalty kill."

The Lady Flames (7-0-1) scored two power-play goals and killed all of their penalties on the night, giving up only the game's first goal on a breakaway with 20 seconds left in the first period.

Liberty netted the equalizer 15 seconds later when Fehr capitalized on her first goal five seconds before the first intermission.

Three-and-a-half minutes into the second period, Fehr recorded her second score — Liberty's first on the power play — finishing Smibert's first assist for what proved to be the game-winner. Less than three minutes after that, the Lady Flames went on another power play, and sophomore forward Shelby Bradford stretched the lead to 3-1 by putting away Smibert's second assist just six seconds into the five-on-four advantage.

Then, just nine seconds after killing three consecutive penalties, McDonald netted her first of two scores at even strength set up by a beautiful tic-tac-toe pass sequence from Smibert on a fast break with 4:54 left in the second.

"They had a really nice give-and-go on a two-on-one," Lowes said. "It was a quick rush back after the penalty and they made them pay."

Finally, McDonald tipped in a shot from junior forward Rachel Gibson to put the win on ice with 1:17 remaining in regulation.

"It was a tighter game for a while, but like Thursday (when the Lady Flames beat Neumann 7-2), we broke it open," Lowes said after the Lady Flames' second win over an NCAA Division III opponent in as many nights. "They're a good team. They had some dangerous speed that was a challenge, and they exposed a couple things. But our penalty kill was really good tonight as a team."

For the game, Liberty outshot Stevenson 37-26 with junior goalie Nadia Rupoli making 25 saves to notch the win, improving to 5-0 with two shutouts and a goals-against average below 1.00.

The defending ACHA DI national champion Lady Flames will travel to Michigan for three games next weekend: against the Wolverines on Thursday at 10 p.m., at national runner-up Adrian on Friday at 3 p.m., and again at Adrian on Saturday at noon.

"It will be another three-game road trip and good test of our endurance," Lowes said. "Michigan and Adrian are both high-end teams, and we'll be looking forward to the rematch with (the Bulldogs). We'll be ready to roll."