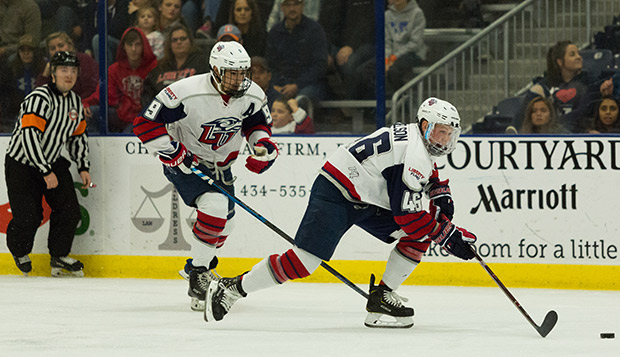 For the second weekend in a row, Liberty University's ACHA Division I men's hockey team will face an ESCHL opponent from the Big Apple when it welcomes New York University to the LaHaye Ice Center on Friday and Saturday as Liberty celebrates Homecoming.

The two teams split their first-ever meetings at the Division I level last November in a rink overlooking the Hudson River in New York City. The Flames let a 3-0 lead slip away by giving up four goals over a 10-minute span in a 5-4 opening setback, before Liberty goalie Cole Burack posted his third shutout and forward Zechariah Roberts netted the golden goal on a power play in overtime to win the rematch, 1-0.

Liberty scouting report:The Flames rose another spot to No. 5 in this week's ACHA DI rankings, moving in front of No. 6 Minot State, even after splitting last weekend's series against Syracuse.

Junior forward Quinn Ryan (8 goals, 7 assists) built on his team scoring lead with four goals in Saturday's 7-1 victory over the Orange. He is complemented by sophomore forwards Cole Gammer (4G, 5A) and Jordan Bochinski (6G, 1A) as well as sophomore forward Devin Pierce (2G, 5A).

New York scouting report: The Violets, who defeated Liberty's DII team to capture their second DII national championship in three seasons in 2017 before moving up to the DI level last year, split their ESCHL-opening series against No. 22 Rhode Island last weekend at URI's Boss Arena, winning 5-2 Saturday after losing 6-1 Friday.

NYU's offense is sparked by forwards Alex Hopkins (5G, 1A) and Scott Mulligan (1G, 5A), with leadership from head captain Mason Gallegos and alternates Brandon Ritchey (2G, 1A), John Kowalewski, and James Moeller, a defenseman.

All-time series: The two teams split their first series at the ACHA Division I level last November at Sky Rink at Chelsea Piers in New York City, where the Violets squeezed out a 5-4 opening victory before the Flames won the rematch in overtime, 1-0.

Coaches: Kirk Handy is in his 19th season as Liberty's head coach and has compiled an overall record of 411-172-27. Chris Cosentino is in his ninth season at the NYU helm and second at the Division I level, with an 18-11-2 record. He guided the Violets to a 139-66-8 record at the DII level.