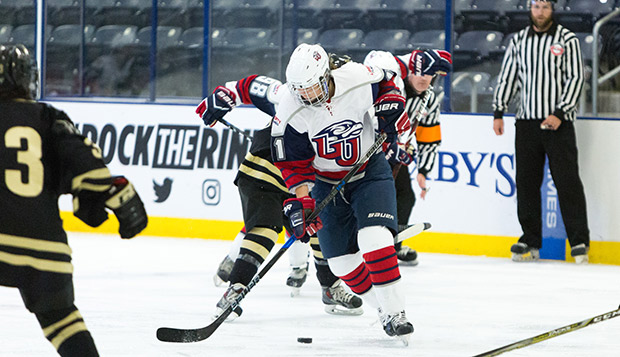 Tied at 2 early in the third period of Thursday night's game at NCAA Division III Neumann (Pa.), University, Liberty University's ACHA Division I women's hockey team netted five unanswered goals over the final 13 minutes of play to pull away for a commanding 7-2 triumph.

"It's nice when we show that burst of explosiveness on offense," Lady Flames Head Coach Chris Lowes said. "We played pretty well and took advantage of a few penalties, scoring on a power play and shorthanded goal. We missed some opportunities early in the game, but more than made up for that in the third period."

Liberty outshot the Knights 41-14 for the game. Junior goalie Nadia Rupoli made 12 saves to preserve the win after giving up the tying goal 21 seconds into the third period.

Sophomore forward Danica Polson recorded the go-ahead goal at the 13:12 mark before graduate defenseman C.J. Tipping doubled the Lady Flames' lead to 4-2 with 9:21 remaining in regulation.

"(Sophomore forward) Shannon Fehr got a shorthanded goal (with 2:39 to go) that gave us a 5-2 lead and put us in the driver's seat," Lowes said. "We scored three goals in the last three minutes."

Polson scored her second goal off an assist from junior forward Alex Smibert with 2:03 left before freshman forward Aislyn Stretch capped the scoring by redirecting Tipping's shot from the point in the final 34 seconds.

Senior forward Lauren McDonald capitalized on a five-on-three advantage, finishing assists from junior defenseman and fellow captain Dana McLeod and junior forward Rachel Gibson to put Liberty on the scoreboard first with 10:42 left in the opening period. Fehr then stretched the lead to 2-0 by finishing a feed from McDonald at even strength midway through the second period before Neumann cut the deficit in half with a power play goal less than five minutes later.

The Lady Flames will travel to Stevenson (Md.) University on Friday at 5:30 p.m. to complete their road trip with another game against an NCAA DIII opponent.

"They're in the same conference (as Neumann), so it will be another good test," Lowes said. "For us, it's another non-conference game and a chance to keep working on our game and getting better."

Next Friday and Saturday, both Liberty's DI women's and men's teams will play back-to-back doubleheaders at Adrian (Mich.). Adrian is the defending ACHA DI men's national champion and the DI women's team was the runner-up to the Lady Flames last year.

The first ACHA DI women's national rankings are due to be released after that series, in early November.