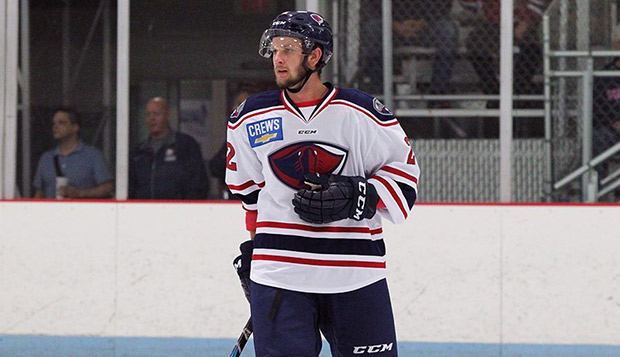 Cam Bakker, a 6-foot, 170-pound defenseman who graduated from Liberty University in 2015 after playing for the Flames' ACHA Division I men's hockey team, was promoted to the South Carolina Stingrays of the East Coast Hockey League (ECHL) to start the 2018-19 season.

The Stingrays are an affiliate of the reigning Stanley Cup champion Washington Capitals. The Hershey (Pa.) Bears are the Capitals' American Hockey League (AHL) affiliate, one level up from the ECHL and below the NHL.

Bakker is the second former Flames defenseman currently playing in the ECHL, joining Zach Schartz, who signed with the Norfolk (Va.) Admirals last March and extended his contract in July.

After netting 28 goals and distributing 57 assists in 139 games over four seasons with the Flames, Bakker, originally a forward from Kenmore, Ontario, revived his playing career last year by playing 20 games with the Cornwall (Ontario) Nationals of the Federal Hockey League (FHL).

He joined the Roanoke Rail Yard Dawgs, a third-year team in the Southern Professional Hockey League, in late January before arriving in Charleston, S.C., at the end of September to report to training camp with the Stingrays as a tryout player.

"I took it as an opportunity to prove myself as a player and was able to get an ECHL contract by the end of camp/preseason," Bakker said, noting that Rail Yard Dawgs Head Coach Dan Bremner was instrumental in his promotion. "He's been a great driving force to give his players the opportunity to be better hockey players and to move up the leagues in North America."

While Bakker was not on the travel roster as the Stingrays opened their season over the weekend in Florida with a 4-2 loss against the Jacksonville Ice Men on Saturday and a 5-4 setback to the Orlando Solar Bears on Monday, he is hopeful he will get in the game when the team makes its home debuts at the North Charleston Coliseum this Saturday against the Greenville (S.C.) Swamp Rabbits and Sunday against the Atlanta Gladiators.

"I have to bide my time for my chance to get some game action," Bakker said.

He expects the transition to the ECHL to go smoothly and hopes to contribute to the Stingrays' success as they are coming off a franchise record four wins in a season.

"For 2018-2019, I'd like to keep progressing with my skills and play," he said. "As players, at this point we know how to play hockey on a physical level, but also mentally. The biggest adjustment is to fine tune your positioning during different scenarios and make the simple plays habitual. At this level, players don't make mistakes often and can make difficult plays look easy to capitalize on."

He said his role with the Stingrays' defensive corps is to play a simple game and move the puck up the ice and look for opportunities to go on attack.

"The less ‘defense' we have to play, the better. So I need to be engaged defensively but take the chances offensively, whether that's joining the rush or getting shots to the net," Bakker said. "For now I have to be patient and, when given the chance, make the most of it." 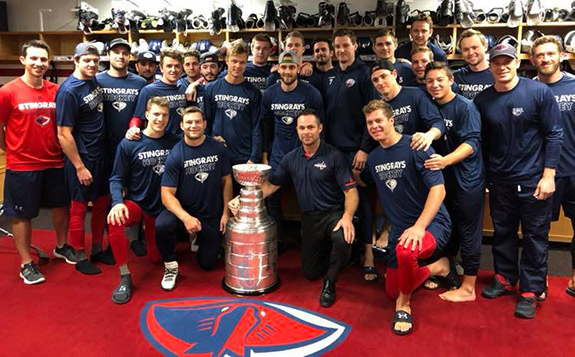 Cam Bakker (tallest player in back row) and the South Carolina Stingrays pose with the Stanley Cup trophy, won by their NHL affiliate, the Washington Capitals, before Friday's home opener.