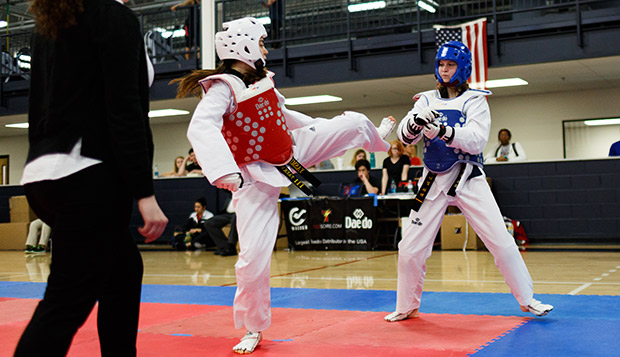 Liberty will host an ACAT tournament in the LaHaye Recreation & Fitness Center for the second time in three years on Oct. 27.

Liberty University's taekwondo team will host its annual self-defense seminar Thursday from 7-8:30 p.m. at its practice facility in the former Macy's building in River Ridge Mall before opening its season Saturday at Massachusetts Institute of Technology (MIT).

"That's an ECTC event, and we are looking forward to that," Liberty Head Coach Tom Childress said of the East Coast Taekwondo Conference competition. "There will be somewhere around 40 schools there, close to 500 competitors."

On Oct. 27, Liberty will host its second Atlantic Collegiate Alliance of Taekwondo (ACAT) event in three years, with approximately 100 competitors from 10-12 schools expected to be in attendance as well as athletes from schools outside the conference. The Flames and Lady Flames will then travel to Cornell University in Ithaca, N.Y., on Nov. 3 for another ECTC event with numbers projected to be similar to the meet at MIT.

Liberty has approximately 20 women on its roster this season and only five to seven men, with the level of experience ranging from beginners to highly talented black belts.

"We've got a lot of new faces this year as a lot of our experience graduated, and, unfortunately, we have had a lot of injuries," Childress said. "It is almost like a rebuilding year for us as our athletes are trying to get experience under their belts. We are getting everyone competition ready and it will be interesting to see how we grow and develop."

Senior black belt Brittany Harris is one of the veterans on this year's squad and has taken on a leadership role among the Lady Flames.

"We are very female dominated this year and we've normally been like half and half," Harris said. "Overall, I feel very confident our team is going to do great because we are very connected this year. We already feel more like a family than I've noticed in the past couple of years."

Morris is one of five women's black belts along with junior Shelby Wilson, senior Tyler Creese, senior Sadie Newton, who will be graduating in December, and sophomore Joanna Woolsley, who was an NCTA blue belt national champion in middleweight fighting last spring.

On the men's side, senior Drew Haack, who took third at the National Collegiate Taekwondo Association (NCTA) national championships in April in Washington, D.C., moved up to black belt as did junior Will Parker. He formerly competed as a red belt along with senior Thomas Siff, who won a red belt national championship in 2017 and is in his second year competing as a black belt.