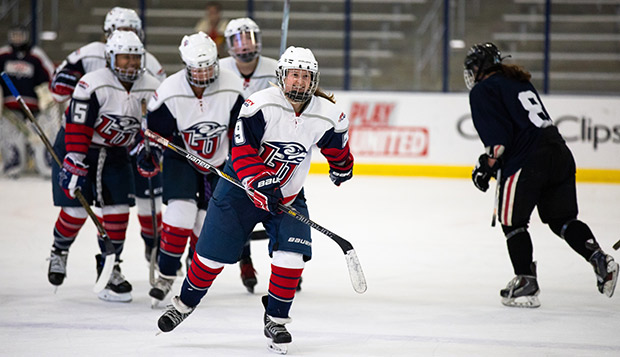 Liberty University's ACHA Division II women's hockey team opened its 2018-19 season with an overwhelming sweep of California University of Pennsylvania, winning by an 11-1 count on Saturday night and 16-0 spread on Sunday afternoon at the LaHaye Ice Center.

On Sunday, the Lady Flames netted five goals from five different players in the first period before adding eight in the second and closing out the lopsided victory with three more in the third.

In Saturday's season opener, Liberty outshot its guests by an 88-10 margin, breaking open an early 1-1 tie with 10 unanswered goals. Turner scored the first and last goals of the first period, and freshman forward Madeleine Niederer and Hegele each recorded goals in the second and third periods to spark the Lady Flames' attack.

Paige Arnosti, Burrell, Connerty, Early, and Greenwood accounted for the rest of Liberty's scoring with Burrell and Greenwood each distributing two assists and Hutton making nine saves to notch the win in goal.

The Lady Flames (2-0) will return to the ice for a series at Pittsburgh on Oct. 27 and 28 before returning home to close out the fall schedule against Army on Dec. 1 and 2.