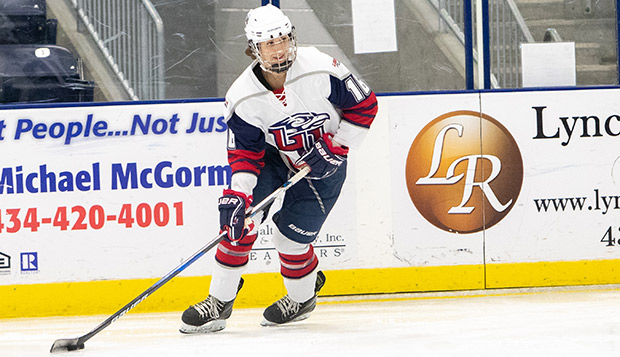 Playing at the break of dawn in Sunday's third and final round of the UMass Showcase, Liberty University's ACHA Division I women's hockey team got things started early, scoring on the first shift of both the first and second periods to set the tone for a 4-3 victory over Bishop's (Quebec) University).

"It was a good, tough game," Head Coach Chris Lowes said after the Lady Flames finished 3-0 in the Showcase. "Bishop's scored on the first shift of the third period and all three of their goals were big momentum changers. Then, they got one late when they pulled their goalie in the final minute."

Bishop's tied the game at 1-1 with 6:48 left in the first period before junior forward Alex Smibert put the Lady Flames ahead to stay by finishing feeds from sophomore forward Danica Polson and junior forward Aly Morris just 21 seconds into the second.

Smibert struck again off an assist from junior defenseman Emily John at the 12:21 mark as Liberty extended its lead to 3-1.

After having a goal called back with 5:10 left in the second, Bishops scored 37 seconds into the third to draw within 3-2. But less than five minutes later, Morris was on the receiving end of a Smibert assist and gave the Lady Flames a critical insurance goal with 14:31 remaining in regulation.

The Lady Flames outshot the Gaiters 37-26 for the game, and Peterson made 23 saves to secure the win.

"Bishop's played us tough and just clawed its way back into the game," Lowes said. "They had their chances. We kind of just held on. They were a good challenge for us, and I'm happy with the way the girls responded. They played good hockey and came a long way over this weekend."

Liberty gears up for another road trip this week when it plays at Neumann (Pa.) at 4 p.m. Thursday and Stevenson (Md.) at 5:30 p.m. Friday.

"Those should be really good challenges as last year; they both gave us good games," Lowes said. "We'll have two practices this week before we head out on the road again."