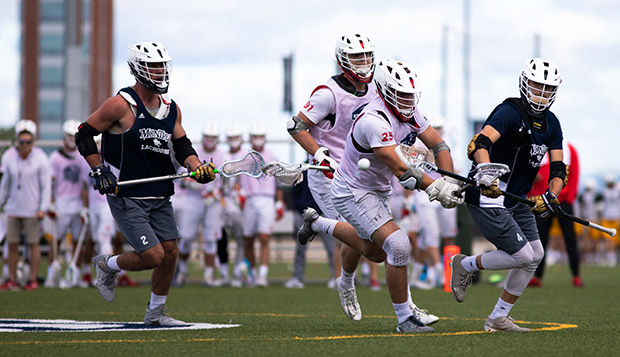 Liberty freshman faceoff specialist Cole Jankowsky knocks the ball out of the stick of a Montreat midfielder in front of Flames senior midfielder Chase Wright during Saturday's opening scrimmage. (Photos by Jessie Rogers)

During Saturday's Fall Tournament, Liberty University's men's lacrosse team demonstrated its depth and conditioning, dominating 50-minute scrimmages against NAIA members Montreat University, 16-4, and Savannah College of Art & Design (SCAD), 11-4, before closing out the day with a 13-5 triumph over NCAA Division I Hampton University at the Liberty Lacrosse Fields.

"We learned some things and got some good film. It was good preparation," Flames Head Coach Kyle McQuillan said. "We got to use all of our depth, our full bench — both on the offensive and defensive sides of the ball. We definitely can find some things we need to clean up and work on, but overall, I was really impressed with the first performance of the 2018-19 season. I'm really happy with the way the guys performed."

Liberty had its offense clicking on all cylinders against Montreat, which is coached by former Flames goalie Ethan Kamholtz. Late in the contest, Caleb Britton and his cousin Elijah Britton helped ignite Liberty's attack, ripping shots from the top and left side of the box into the back of the net before Elijah Britton set up midfielder Carter Elliott for two point-blank finishes with passes from behind the cage.

In the second game, the Flames faced SCAD for the first time since the SELC Division II championship game in 2013, in which Liberty won to secure its first national tournament bid. The Flames moved up to MCLA Division I the following season before qualifying for its first MCLA DI nationals last spring, while SCAD has since become an NAIA program.

Liberty showed consistent play on both sides of the field and from the faceoff circle to the goalie box.

"The guys played a lot better in transition, and we had a lot more transition goals," McQuillan said. "Our defense definitely played a much more physical game. As far as goaltending goes, we didn't see a ton of shots, but both (seniors) Brayden (Harriman) and Ryan (Reynolds) did a really good job. And both of our freshmen faceoff guys, Shane (Reynolds) and Cole Jankowsky, were on the positive side of faceoff wins."

"If we need to, we can always pull him back, but Austin is a left-handed guy with a great shot and great feet," McQuillan said. "He's very elusive, so if we can utilize him as an attackman and get great faceoff play from two other guys, that's just a testament to the depth that we've got."

The tournament provided players, coaches, and officials experience with three new rules adopted by the NCAA and MCLA — an  80-second shot clock, a smaller substitution box, and legal dive shots, which are the lacrosse equivalent of a dunk in basketball.

"At the end of the day, it was just an opportunity for all of us to get acclimated and to play some lacrosse with some of the new rules that have been put into play," McQuillan said. "It's a learning opportunity for everybody, including the referees."

Liberty will host its annual alumni game this Friday as part of the Homecoming Weekend activities, before gearing up for the Nov. 9 showdown with SELC Northwest Region rival Virginia Tech and the Nov. 10 Fall Recruiting Showcase.

The Hokies are at the forefront of McQuillan's mind after they upset the Flames on their home field in the April 13 season-ending showdown. Virginia Tech finished ranked sixth after losing to eventual champion Michigan State in the quarterfinals of nationals. (Seventh-ranked Liberty also lost in the quarterfinals to defending national champion Chapman in overtime.)

"We're looking forward to facing Virginia Tech in November and playing them at home because we know in the spring, we've got to travel to Blacksburg," he said. The April 19 regular-season-ending showdown will likely determine the Northwest Region's top seed for the SELC Tournament.