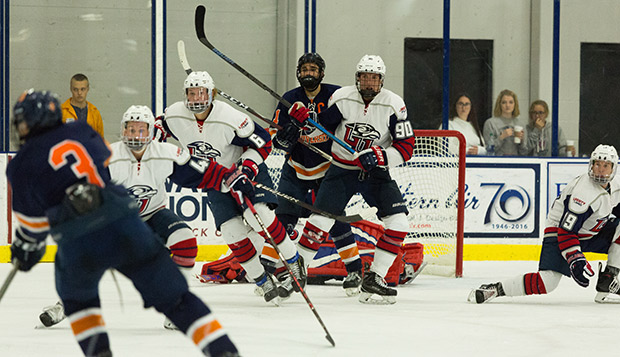 In another game characterized by scrappy play and fast-paced scoring opportunities on both sides, Liberty (6-1, 3-1 ESCHL) was capitalistic on attack, cashing in on two goals on a five-on-three power play late in the second period to seize control of the contest.

"Syracuse is a good team," Flames Head Coach Kirk Handy said. "Those guys work hard, so I was real proud of our response. I really liked the way we were skating tonight, I liked our back pressure and our forecheck, so it was good overall."

The Orange (3-1, 3-1) drew first blood with 7:11 left in the first period when Owen Herrington, who scored twice in Friday night's 5-4 overtime upset, received Christian Van Hecke's assist from behind the net for a point-blank finish in front.

Liberty closed the first period with a barrage of high-quality scoring chances repelled by Syracuse goalie Cal Stewart, who glove-saved what looked like a sure-fire score by junior forward Brock Thompson off a backdoor pass from Ryan.

The Flames carried that offensive intensity into the second period and responded with four unanswered goals to take a commanding 4-1 advantage. They finally broke through with the tying goal at the 17:16 mark when senior forward Zechariah Roberts received a pass from sophomore forward Ryan Cox, skated through the right circle, and fired a low, sharp-angled shot inside the left post.

"That was a great goal by Roberts, who cycles back in the neutral zone, gets a great pass, and he goes in, drives it wide, and puts the puck on net," Handy said.

"That's just what we needed in order to open the floodgates and start burying them," Flames junior defenseman Jacob Fricks added.

Just over a minute later, Fricks started a fast break with a steal and quick outlet pass to sophomore forward Cole Gammer up the left wing. Gammer calmly dished a pass from the top of the left circle to a wide-open Ryan cutting through the right crease, where he slid a backhanded shot under the pads of Stewart for the go-ahead goal with 16:08 left in the second stanza.

The Flames got two more scores less than a minute apart after Syracuse picked up two penalties on the same play, giving Liberty a five-on-three advantage with 7:08 left in the period. Sophomore forward Jordan Bochinski received a backhanded feed from Fricks (one goal, three assists) behind the cage on a rebound and bounced the puck in off of Stewart's backside, extending the Flames' edge to 3-1.

Just 58 seconds later, with the Flames still on a five-on-four, Thompson received a pass from junior defenseman Garrett Nelson and lifted a wrist shot through the right circle into the upper netting with 5:25 left in the period.

"Garrett's putting up assists like crazy," Fricks said. "He's the smartest defenseman we have. He knows exactly where to put the puck every chance he gets and he's been successful putting it where it needs to be. Garrett and I work really well on the point and we're able to feed each other pucks and find empty lanes, and we've got good guys in front of the net who are able to tip and not allow the goalie to see anything."

Liberty didn't let up in the third as Fricks received a pass from Nelson and turned it into his ninth assist of the season, rocketing a slap shot from the top of the left circle for a top-shelf score that made it a 5-1 contest. Just over a minute later, junior defenseman Chaydan Lauber sent a stretch pass up the left wing, springing Ryan for a breakaway. He sprinted onto the puck and deked in front of Stewart before finishing through the five hole to complete his second hat trick at home.

But Ryan wasn't finished, tacking on a fourth goal after Thompson's shot from the right circle was blocked by Syracuse's backup goalie. Flames junior defenseman Matt Cruickshank gathered the rebound and sent a pass to Ryan deep in the left circle. Ryan sent a wrist shot into the upper netting for the 7-1 final.

Liberty outshot Syracuse 48-29 and senior goalie Josh Halpenny made 28 saves to improve to 2-0 this season.

The Flames return to the LaHaye Ice Center to host another team from New York, NYU, over Homecoming Weekend, Oct. 19-20. The puck drops at 7 p.m. on Friday and Saturday nights.