Lady Flames net a dozen goals in demolition of Davenport 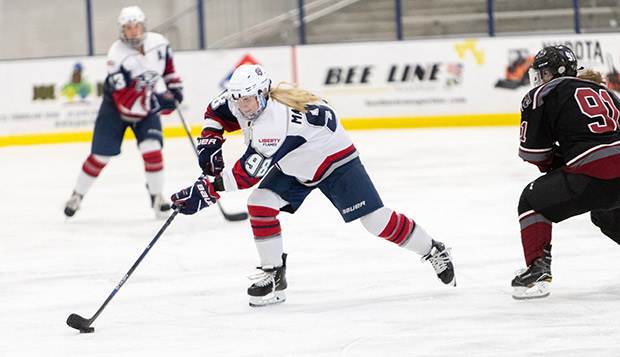 Freshman forward Grace Machholz had one goal and one assist in Saturday's shutout of Davenport. (Photo by Kevin Manguiob)

Davenport was coming off a 6-0 loss to tournament host UMass on Friday night. The Panthers trailed Liberty by 6 after the first period, when the Lady Flames outshot them 27-3.

Junior defenseman Emily John started the scoring off an assist from graduate defenseman and alternate captain C.J. Tipping just over a minute and a half after the opening faceoff before junior forward Deena Birney netted back-to-back goals in a span of two minutes to push Liberty's lead to 3-0 with 12:29 to go in the first.

Smibert scored the first of her two goals 1:39 into the second period, set up by sophomore defenseman Sydney Pierce. Senior forward and alternate captain Lauren McDonald finished an assist from Birney less than two minutes later to stretch Liberty's lead to 8-0.

Liberty capitalized on its first power play when sophomore forward Shelby Bradford put away a pass from Gibson with 8:50 left in the second. Alexis Paulmert completed the second-period scoring off an assist from fellow freshman forward Aislyn Stretch, putting the Lady Flames on top 10-0 at the 5:21 mark. Liberty outshot Davenport 26-2 in the second.

Finally, in the third, Bradford finished a feed from Machholz and senior defenseman Katie Comeau with 12:25 to play before Smibert wrapped up the scoring off assists from junior forward Aly Morris and Polson with 2:01 remaining.

Liberty has a quick turnaround for its third and final game of the Showcase. The Lady Flames will take on Bishop's (Quebec) University at 7 a.m. Sunday, when it will look to conclude tournament play with a perfect 3-0 record.