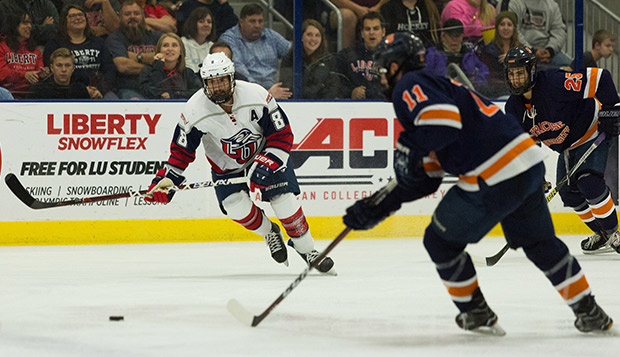 In a game reminiscent of last season's opener in the first-ever series between Syracuse and Liberty at the ACHA Division I level, No. 22 Syracuse upset the sixth-ranked Flames in a back-and-forth affair 5-4 in overtime on Friday night at the LaHaye Ice Center.

Orange forward Matt Jacobs lifted a breakaway shot into the top right corner of the cage to clinch the comeback win just 37 seconds into the three-on-three sudden-death overtime.

"You take the game to overtime and anything can happen," Flames Head Coach Kirk Handy said after his team's first loss following a 5-0 start. "Three-on-three, it's kind of wide open."

Syracuse (3-0, 3-0 ESCHL) came out on the offensive, but Burack made some clutch saves early to preserve the scoreless tie.

"In the first period … and for the majority of the second period, we were struggling to find our game a bit," Handy said.

"They scored two power-play goals and were able to catch us on a couple of breakdowns," Handy said.

Between power plays, Liberty got on the scoreboard midway through the first period when junior defenseman Chaydan Lauber sent a quick, cross-crease assist to senior Basil Reynolds for a top-shelf finish at the 10:07 mark.

Syracuse struck back in the final minute of the first period when forward Owen Herrington skated past Reynolds though the right circle and lifted a shot from near the end line over the shoulder of senior goalie Cole Burack into the upper netting, making the score an even 1-1 going into the intermission.

Orange forward Connor Preston stole a pass behind the Flames cage and forward Ryan Eckert capitalized by slamming in a loose puck from deep in the right crease for a 2-1 lead at the 11:31 mark of the second period. Just 1:16 later, Peter Owen Hayward, Syracuse's leading scorer the past two seasons, put away a one-timed finish of a cross-ice pass onto his tape from defenseman Ford Hatchett to stretch the Orange's lead to 3-1 with 10:15 to go.

The Flames got one goal back on a power play opportunity with just 4.5 seconds left in the period when junior forward Victor Blomberg put the finishing touches on a shot from the left wing by sophomore forward Devin Pierce, crashing the cage and getting a stick on the puck to push it across the goal line.

Then, just over four minutes into the third, Liberty netted the equalizer again with a man advantage when Pierce took a pass from junior forward Quinn Ryan behind the Flames' net and accelerated up the middle of the ice before maneuvering through the crease for a backhanded shot under the pads of Syracuse goalie Cal Stewart.

With Liberty back on the power play, the Flames executed textbook tick-tac-toe passing to net the go-ahead goal with 7:18 remaining in regulation. Junior defenseman Garrett Nelson sent a pass to Ryan who swung the puck to sophomore forward Cole Gammer deep in the left circle, where he spotted junior forward Brock Thompson all alone in the right circle for a perfectly placed assist and one-timed finish.

But Liberty's 4-3 lead was fleeting as the Orange capitalized on another power play to tie the contest on Herrington's second goal of the game. He crashed the cage from the right corner to convert an off-balanced putback of a shot from the point by defenseman Luke Caddo, knotting it at 4-4 with 5:23 to go.

"It was a game of special teams," Handy said. "We had three power-play goals and battled back and had an opportunity to win the game with two minutes to go on a power play, and we couldn't get the job done."

The Flames and Orange will meet again Saturday in the LaHaye Center with the opening puck drop set for 7 p.m., webcast live by LFSN and carried by ESPN+.

"We'll regroup and come back," Handy said. "We have an older group of guys and we have full confidence that our team is going to respond well."

"At the end of the day, the guys played hard, they played well," Liberty Associate Head Coach Jeff Boettger added. "We just need to refine some things and play for 60 minutes and learn (from the loss)."