Flames rise to No. 6 in ACHA, host Orange in ESCHL clash 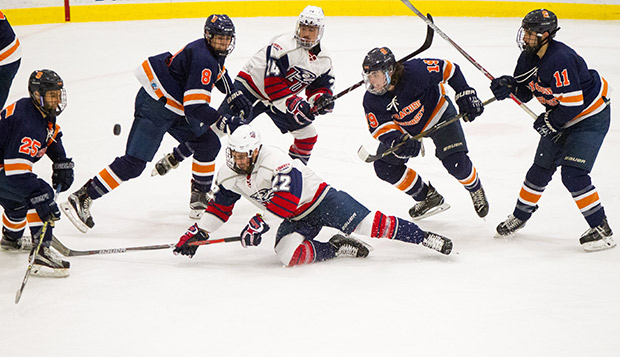 Zak Hayes (22) dives to win the puck in a pack of Orange in front of fellow Flames senior forward Zechariah Roberts last October at the LaHaye Ice Center. (Photo by Andrew Snyder)

Liberty University's ACHA Division I men's hockey team moved up three spots in this week's ACHA Division I national rankings to No. 6 — its highest since moving up to an all-time high No. 3 ranking in December 2013 — as it prepares to host Syracuse for only the second time at the DI level this weekend.

The Flames, off to a 5-0 start after winning a record 19 in a row last season to defend their Eastern States Collegiate Hockey League (ESCHL) tournament title, narrowly escaped with two one-goal wins this past Friday and Saturday at Delaware in their first ESCHL series of the season.

Last year, in its first season in the league, Syracuse dealt Liberty one of its three ESCHL losses as the eventual regular-season champion Flames and split their only series with the Orange, also played in mid-October at the LaHaye Ice Center.

In the opener, Liberty squandered a 3-0 lead by allowing Syracuse to score five unanswered goals in a 5-3 setback. The Flames avenged that loss by scoring four goals in the first period of a 4-2 victory the next night.

Liberty scouting report: Junior forward Quinn Ryan (4 goals, 3 assists) eclipsed the 100-point mark for his career with the Flames by netting a third-period hat trick in the Sept. 29 "Midnight Mayhem" matchup against IUP. He is now in a tie with junior defenseman Garrett Nelson (7 assists) for the season scoring lead. With a team-high three game-winning goals, sophomore forward Jordan Bochinski (5G, 1A) ranks third, including a team-high three game-winners, followed by sophomore forward Cole Gammer (4G, 1A).

Offensively, the Orange return seven of their top eight scorers, including junior forwards Peter Owen Hayward (who led the ACHA in scoring as a freshman with 38 goals and 26 assists before pacing Syracuse with 40 points in 2017-18), Trip Franzese (25G, 45A over the past two seasons), and Matthew Jacobs (25G, 37A over the past two years). Hayward and Jacobs netted the game-winning goals in a season-opening sweep at ESCHL rival Rhode Island last weekend.

All-time series: The two teams are 1-1 in ACHA Division I matchups.