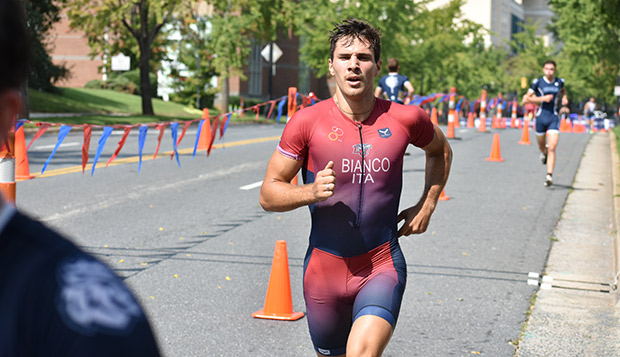 Flames graduate student Giovanni Bianco was the overall winner of Sunday's Tri at the Trump — a 750-meter swim, 13.25-mile cycling stage, and 5K run in Mooresville, N.C., hosted by Queens University of Charlotte. All three of Liberty University's men's triathletes finished in the top 10 out of 127 competitors while the Lady Flames' three contestants placed in the top 30 out of 71 entries, with one in the top 10.

"He's got a lot of muscle and he is a machine on the bike," Flames Assistant Coach Van Phillips said, noting that he has a background in rowing and that core strength transfers well to cycling.

Liberty freshman Christian Brasher got a jump on the competition by coming out of the water in second-place in 10:24 before finishing seventh overall in 1:02:59 with the 11th-fastest cycling stage (32:03) and seventh-fastest run (19:26).

He was followed by ninth-place freshman Max Galbraith, who posted the 15th-fastest swim time (11:25) and moved up through the field as the race went on — completing the sixth-fastest swim in 31:47 before peaking with a third-best run time of 18:31 to cross the finish line in 1:03:20.

The event started and ended beside the 18th hole of Trump National Golf Club Charlotte with the 5K run following along the golf course's cart paths. Swimmers came out of Lake Palmer and transitioned to the cycling stage by running through the golf clubhouse.

"We've never been to a venue quite like that before," Phillips said, noting that the race course had a Colonial Williamsburg feel to it with some cobblestone streets around the club's tennis course.

On Saturday, the same six triathletes plus senior Sarah Parker warmed up for the Tri at the Trump by competing in a Major League Triathlon (MLT) draft-legal Super Sprint in downtown Charlotte, which started with a pool swim followed by a draft-legal cycling stage. Ziebart placed 12th in the women's A race in 22:09.9 and Parker was the Lady Flames' fastest finisher in the B race (sixth in 22:58.9), followed by Erquiaga (eighth in 24:09.6) and Wade (ninth in 24:15.7). In the men's A race, Brasher qualified seventh in 18:01.7 followed closely by Bianco (eighth in 18:08.5) and Galbraith (13th in 19:11.5).

Liberty will next host the Mid-Atlantic Collegiate Triathlon Regional Championships on Oct. 20 at Smith Mountain Lake State Park, where competitors must choose between a draft-legal sprint in the early morning and the Olympic-distance (1.5K swim, 40K bike, 10K run) championships to follow. Those races are part of the Liberty Triathlon Festival, which also include the final event of the Kinetic Multisports Series for triathletes from Virginia, Maryland, Delaware, Pennsylvania, and New Jersey, and the NCAA Women's East Regional Qualifier for the Nov. 4 national championships in Tempe, Ariz.