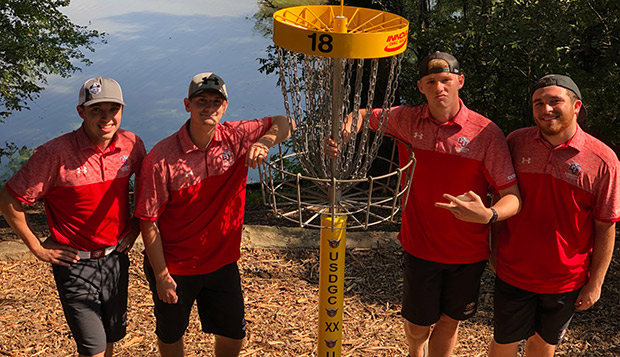 The men's championship flight of Liberty University's disc golf team opened its season Friday and Saturday mornings in the Dean's Cup, played on the same courses in Rock Hill, S.C., as the United States Disc Golf Championships that concluded later on Saturday.

In Friday's 18-hole semifinal round, Liberty shot a 62 on the Par 67 course to finish tied with NC State. The Flames won a two-hole, sudden-death playoff with the Wolfpack when senior Ryan Shumate's approach shot set up graduate Jeremy Miekley for the winning birdie putt. NC State had tied for 10th while Liberty tied for 18th in the team competition at the National Collegiate Disc Golf National Championships last spring at the Hippodrome Complex in North Augusta, S.C.

The victory over NC State sent the Flames to the championship match against Mississippi State, which won the national title by 33 strokes over runner-up Texas A&M. On Saturday, the Bulldogs only edged the Flames by four shots in the final, 62-66. Liberty trailed 33-30 after nine holes and played nearly even with the defending champions over the final nine, finishing at one-under par for the day.

"Liberty maintained a great, balanced attack to stay in a tie with MSU for the first few holes until a double (bogey) out of bounds allowed them to take the lead," Flames Head Coach Steve Bowman said. "It was a great season opener for us on an amazing (Winthrop Gold) course."

"To have the opportunity to compete at this level of a tournament in October was amazing," Bowman said. "It was a good gauge to see where we stand against the defending national champions."

Liberty will travel to Appling, Ga., to compete in the Southeast Collegiate national qualifier on Oct. 27-28 before hosting its annual Flamethrower Invitational from Nov. 3-4 on its two 20-hole courses near Hydaway Outdoor Recreation Center and on East Campus.

Watch a video of the last three holes of Saturday's championship match between Liberty and Mississippi State on the National Collegiate Disc Golf Championships' Facebook page.