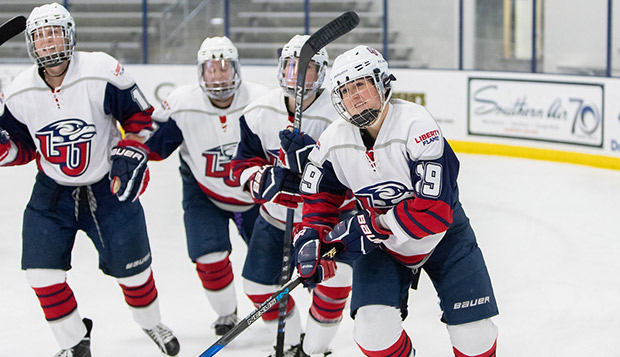 After letting an early 2-0 lead turn into a 2-2 tie in Saturday's second game, the Lady Flames showed more resolve to contain the visiting Lynx in Sunday's finale, securing a 3-0 victory by playing with perseverance on defense and tenacity on attack.

"This was the first of three straight weekends with three games and I love it," Liberty Head Coach Chris Lowes said. "It's tough. It's hard on our girls and we saw some injuries this weekend, but I think we are a better team now than we were on Thursday. We've come a long way."

Moments after Lady Flames junior goalie Nadia Rupoli repelled a couple quality shots on goal from deep in the right crease, Liberty extended its lead to 3-0 on a quick counterattack at the 10:57 mark of the second period with Polson sending a crossing pass to Smibert who crashed into the left crease and finished past the sprawling Lynx goalie.

"That was a great rush," Lowes said. "Smibert and Polson have great chemistry and they were buzzing. I was really happy with that line and their energy."

Lindenwood Belleville outshot the Lady Flames for the second time in defeat — 31-20 on Sunday after holding a 32-25 shot advantage on Friday night.

The Lynx were called for three penalties to just two for Liberty.

"It was tough and physical, but the refs let us play," Lowes said.

Early in the third period, Lindenwood Belleville intensified its pressure around the Lady Flames' cage, but Rupoli held her ground and smothered a few dangerous shots to preserve the shutout. Rupoli gloved a breakaway slapshot by freshman center Dakota McAlpine with 17:50 remaining in regulation before Liberty shifted the momentum in its favor.

"I thought they played very well, maybe their best game of the weekend, but so did we, especially for a third game," Lowes said. "Both teams showed their conditioning. It was just fast, physical hockey."

Rupoli made 31 saves to record her first shutout after leading the ACHA with a 0.85 goals-against average and finishing tied for second in the league with six shutouts last season.

"We ran six defensemen and they all played well and Nadia played a great game in goal," Lowes said. "I was happy to see her in there and get the shutout."

After playing five exhibition games at home last month and completing their first ACHA homestand this weekend, the Lady Flames will travel to the University of Massachusetts for a three-game showcase against Rhode Island on Friday at 7 p.m., Davenport on Saturday at 3 p.m., and Bishop's (Quebec) University on Sunday at 7 a.m.

"We are excited for our first road trip," Lowes said. Liberty will be traveling the last three weekends of October — to UMass next weekend, Neumann (Pa.) and Stevenson (Md.) on Oct. 18-19, and Michigan and national runner-up Adrian from Oct. 25-27. "It's fun to be on the road with the team. It's almost when you officially come together and become one unit."

He expects to have two defensemen — senior Katie Comeau and sophomore Danielle Bergen — available for the trip after missing this weekend's series due to injuries, and possibly senior forward Lauren McDonald back after she sat out all but the first half of Friday's game.