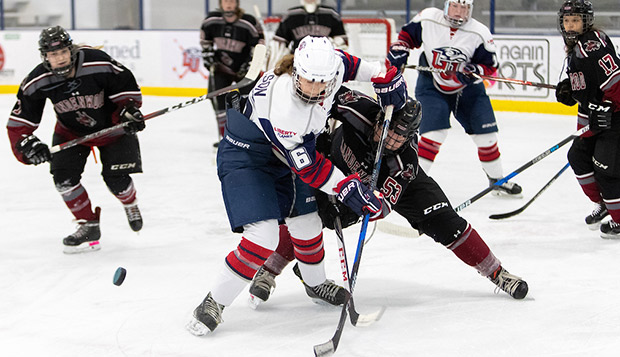 Following a physical first contest in its three-game series with Lindenwood Belleville on Friday night at the LaHaye Ice Center, Liberty University's ACHA Division I women's hockey team waged a back-and forth rematch on Saturday afternoon that resulted in a 2-2 tie.

"They're a top-five team and everyone in that top five is dangerous," Head Coach Chris Lowes said, noting that the Lynx finished last season ranked No. 4 behind the No. 1 Lady Flames, who captured their second national title in four years. "It's good for us. We're excited to get back out there I think we feel like we left a little bit out there and I'm sure our girls would love to play another period right now to find a winner."

Sophomore forward Shannon Fehr had a goal and an assist as Liberty (1-0-1) broke open a scoreless tie with their only two goals of the game in the final 5:38 of the first period.

After multiple scoring chances by the Lady Flames, Fehr picked up a loose puck in the high slot and skated in for a one-on-one opportunity against Lynx goalie Hannah Stone, with her shot trickling across the goal line.

Seventeen seconds before the first intermission, Liberty junior forward Deena Birney started a fast break and Fehr gathered the rebound of a shot by freshman forward Grace Machholz along the left end line. She pivoted with the puck and sent a beautiful backhanded feed across the goal mouth where Birney finished through the five-hole for a 2-0 advantage.

"We had other chances, but just could not seem to create much or get shots from the point," Lowes said. "We had a lot of offensive possession, a lot of traffic. We just couldn't buy a goal. That's just hockey. They did a good job limiting us and made the most of their chances."

Lindenwood Belleville (1-1-2) ended the second period with the same kind of push and nearly tied the contest on a power play in the closing seconds. Liberty freshman goalie Megan Peterson blocked a shot by defenseman Lindsay Gillis with a minute to go. Seconds later, Lynx forward Hallie Fisher started an odd-man rush down the left wing and launched a shot from the top of the left circle that glanced off Peterson's glove into the upper netting, trimming the deficit to 2-1 with 42 seconds left.

"It was a bad line change and we gave up an odd-man rush," Lowes said. "I'm sure Hannah would like to have that one back, but there was some traffic in front and it was a tough shot."

Birney was called for a penalty in the final seven seconds of the period and Lindenwood Belleville forward Marissa Delry got two shots off the ensuing faceoff, with the second fired from beside her bench tipped in a split second after the second-period buzzer sounded.

The Lynx officially tied it up with 12:58 remaining in regulation when center Ashley Dietmeier dug the puck out of the right corner back to defenseman Tessa O'Connor, whose shot from the top of the right circle deflected off Birney's stick under Peterson's pads to knot the game at 2-2.

Lindenwood Belleville maintained an edge in puck possession for the rest of the period, but Liberty's defense shut the Lynx down, forcing a scoreless five-minute sudden-death overtime period.

"Shots aren't always an indicator," Lowes said. "It was a good game. Last year, we played a lot of cupcake games. This year, we're going to get tested and we've got to be ready whether we're missing people or not."

The two teams will wrap up the rare three-game series Sunday at noon back at the LaHaye Ice Center.