Flames come away with narrow ESCHL sweep at Delaware 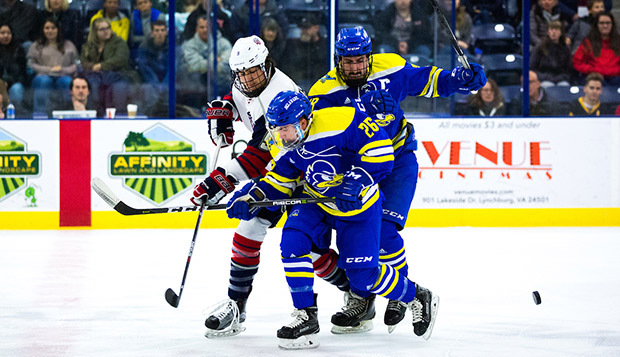 Junior forward Josh Hamilton set up a shorthanded goal late in the first period and scored the game-winner midway through the third as Liberty University's ACHA Division I men's hockey team fended off a comeback bid to complete a sweep of ESCHL rival Delaware with a 3-2 victory, Saturday at Fred Rust Arena.

"We pulled out another tight one," Flames Head Coach Kirk Handy said after his team improved to 5-0, 2-0 in ESCHL play. "Our best line tonight was (sophomore forward Ryan) Cox, Hamilton, and (Senior forward Zechariah) Roberts. We've only had that line together for a few games and they had a real solid game tonight."

Junior defenseman Garrett Nelson distributed two key assists to spark the Flames' attack, with the first coming on a rebound by sophomore forward Cole Gammer with Liberty on a power play with 4:04 to go in the first period.

"Garrett took a shot and Gammer tucked it in from in front of the net," Handy said.

Then, with 1:25 left in the period and the Blue Hens on a power play, Hamilton chased down a loose puck and started a fast break down the right wing. He put a shot on goal and Cox pocketed the shorthanded putback from deep in the left crease for a 2-0 advantage.

Delaware (1-3, 0-2) rallied to tie the contest by capitalizing on a five-on-three power play with 5:33 left in the second period and netting the equalizer with the teams battling in four-on-four action with 15:02 remaining in regulation.

Five minutes later, Nelson set up Hamilton with a fantastic feed and the team captain lifted Liberty to the 3-2 lead that would stand for the final 10 minutes.

"It was nice to score a goal there in the third period, which was the best period we played today," Handy said.

He added that the Flames' defense played a critical role in the triumph, with players like forwards Zak Hayes and Victor Blomberg and defenseman Chaydan Lauber blocking a total of 22 shots for the game.

"Cole Burack again played a great game for us in goal tonight and made a lot of timely saves," Handy said. "A big part of our success was our penalty kill. We were six for seven and (forwards) Zak Hayes and Andy Clarke had big games for us on the PK."

For the contest, Liberty outshot the Blue Hens, 37-27, with Burack making 25 saves, but giving up multiple goals for the first time in four starts this season.

"We want to learn from the things we need to refine before we play two more big conference games at home against Syracuse next weekend," Handy said. "We want to make sure we're playing a complete game."

The Flames will host the Orange on Friday and Saturday at 7 p.m. at the LaHaye Ice Center.