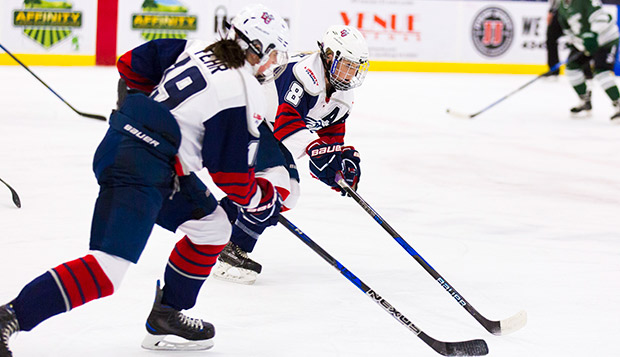 "We had a bit of a short bench tonight and needed a couple people to step up," Lady Flames Head Coach Chris Lowes said of two of his four alternate captains. "C.J. and Lauren certainly led the way offensively and we needed it tonight."

The Lady Flames capitalized on their first power play opportunity with just under 15 minutes left in the first period when Tipping launched a wrist shot from the high slot that ripped past Lynx goalie Michelle Coonan into the upper netting.

Both teams had several high-quality chances throughout the rest of the first period. Lindenwood Belleville squandered a five-on-three power play and hit the post with a shot in the crease.

Liberty struck quickly in the second period, padding its lead to 2-0 just 21 seconds after the opening faceoff. McDonald chased down a long clearing pass and pounced on the loose puck after it rebounded off the back boards, slapping her point-blank shot past Coonan into the top left corner of the net.

The Lady Flames surged to a 3-0 edge with 13:08 left in the second when Tipping intercepted the puck while backpedaling on a Lynx fast break and sent a pass up the left wing to McDonald, who skated in and lifted a wrist shot top shelf.

But Lindenwood Belleville took advantage of two defensive breakdowns to cut the deficit to 3-2. Less than a minute after McDonald's second score, Lynx freshman center Dakota McAlpine cashed in on a Liberty turnover behind its own cage to jam the puck inside the right post from point-blank range past junior goalie Nadia Rupoli.

Ten minutes later, after dumping the puck behind the Lady Flames' net on a fast break, Lindenwood center Ashley Dietmeier finished a wide-open shot in front after receiving Katie Stelling's short feed from behind the cage, making it a one-goal game with 2:04 left in the second.

"We made a couple mistakes and they kind of took control a bit there for the last 10 minutes of the second period," Lowes said.

Liberty's defense redeemed itself in the third period, killing another penalty midway through before the Lady Flames converted an insurance goal on a counterattack. Liberty sophomore forward Shelby Bradford stole the puck in the defensive zone and sent a short pass up to junior forward Vanessa DeMerchant, who skated through the right circle and set up freshman forward Aislyn Stretch's one-timed finish in the left crease for her first ACHA goal for the Lady Flames.

"She stepped up today," Rupoli said of Stretch. "We had her on the power play a little bit, too, and she played really well. I'm looking forward to seeing what she does the rest of the year."

Saturday's 4:30 p.m. rematch will be webcast live by LFSN before the teams conclude the series Sunday at noon at the LaHaye Ice Center.

"They're one of the teams to watch in the future and I'm glad we got them early," Lowes said of the Lynx. "It's a fun opening weekend for us to play a great team."