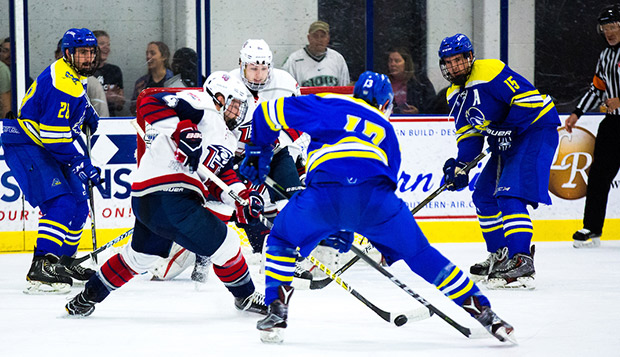 Liberty battles Delaware around its own goal during a home matchup last season. (Photo by Andrew Snyder)

Shut out for more than two and a half periods, Liberty University's ACHA Division I men's hockey team heated up with the pressure in Friday night's ESCHL opener at Delaware's Fred Rust Arena.

The Flames netted the tying and go-ahead goals in a span of 28 seconds with 9:00 remaining in regulation to emerge with a 2-1 triumph and remain unbeaten at 4-0, 1-0 in ESCHL play.

"It's a bigger win because it is a conference game," Liberty Head Coach Kirk Handy said. "Delaware played well. Give them credit. I don' think we are happy with the way we played tonight. We were in the box too much tonight again, which is something we have to take care of. But our PK tonight was fantastic, killing off six penalties."

The Blue Hens (1-2, 0-1) nearly padded their 1-0 lead on a shorthanded odd-man rush with 9:15 to go, but Flames senior goalie Cole Burack blocked a point-blank shot by Jakob Defares off a cross-crease feed from Michael Nisky before Liberty tallied the equalizer on a counterattack.

Liberty capitalized on the power play when Devin Pierce sent a perfectly placed pass from just inside the left blue line to fellow sophomore forward Jordan Bochinski, who skated in front of Delaware goalie Stephen East and tucked a backhanded shot underneath his pads.

"Bochinski's played real well for us this year and Cole Burack played fantastic tonight," Handy said. "He was a big reason for our success."

As the PA announcer finished crediting that score, the Flames caught the Blue Hens' defense off guard to convert the game-winner, with junior defenseman Basil Reynolds sending the puck to junior captain Josh Hamilton in the right circle where he sent a cross-crease assist to senior forward Zechariah Roberts for a one-timed, top-shelf finish.

"It was a great play," Handy said. "The next shift after a goal is a big one and we were able to put that in the back of the net."

The Flames outshot the Blue Hens, 32-28, with Burack making 27 saves to keep his goals-against average through three starts at exactly 1.00. Delaware's only goal came at the 17:03 mark of the second period when forward Kevin Felice's shot from along the back boards glanced off Burack's back into the cage.

The two teams will return to the Fred Rust Arena for Saturday afternoon's rematch, with the puck expected to drop at 3:45 p.m. Watch the live webcast on Delaware's YouTube channel.

"We've got to use it as an opportunity to get better," Handy said. "We'll learn from this and move forward from tonight."