No. 9 Flames begin ESCHL title defense at No. 23 Delaware 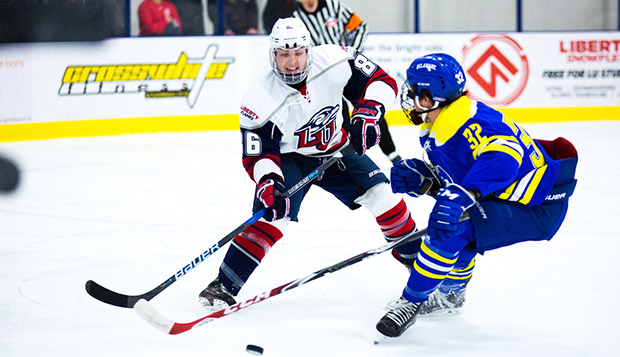 All six ESCHL teams are currently ranked in the ACHA DI Top 25. The Flames are the only one in the top 10, however, as they begin defense of their first regular-season title (Liberty finished 17-2-1 in league play last year) and eventually vie for their third consecutive ESCHL Tournament championship since joining the conference in 2016.

"We've got a veteran group of guys and they will know what to expect," Head Coach Kirk Handy said ahead of his team's first test away from the LaHaye Ice Center. "We're going to have to gear our minds toward those games and we're looking forward to heading up to Delaware to play two tough conference games."

The Flames, who leave for Newark, Del., on Thursday and will spend part of Friday working with youth at Ranch Hope, will have to adjust to playing on the Blue Hens' Olympic-sized rink.

Liberty scouting report:  After sophomores Cole Gammer and Jordan Bochinski accounted for all of the Flames' scoring through the season's first four periods, junior forward Quinn Ryan (4 goals, 2 assists) completed a third-period hat trick in Saturday's Midnight Mayhem matchup and overtook the team scoring lead as one of six goal scorers in a 6-0 rematch to help complete a sweep of Indiana University of Pennsylvania.

"They're going to be doing a lot of scoring all year and we're looking to all lines to produce," Ryan said of Bochinski, who ranks second with 4 goals, 1 assist, and Gammer, who's third with 3 goals and 1 assist. "We have four solid lines and definitely don't have any weak links."

Senior goalie Cole Burack (2-0, 1.00 goals-against average, 95.0 save percentage) and Josh Halpenny (1-0, 0.00 GAA, 100 SP, 1 shutout) provide one of the top goaltending tandems in the ACHA. They have received excellent defensive support from juniors Matt Cruickshank (1G, 2A), Jacob Fricks (1G, 2A), and Garrett Nelson (4A), who have also chipped in offensively.

Delaware scouting report: Like the Flames, Delaware graduated the top scorer from last year's team — center Cole Zucker. Likewise, the Blue Hens have had other players step up, including Chris Mazzella, who ranked third on the team in scoring last season. He netted two goals in both of Delaware's first two games with Kevin Felice also tallying twice in their 8-3 victory over Penn State Berks last week.

All-time series: The Flames won all five meetings with the Blue Hens last season to move into the series lead 19-18-2.