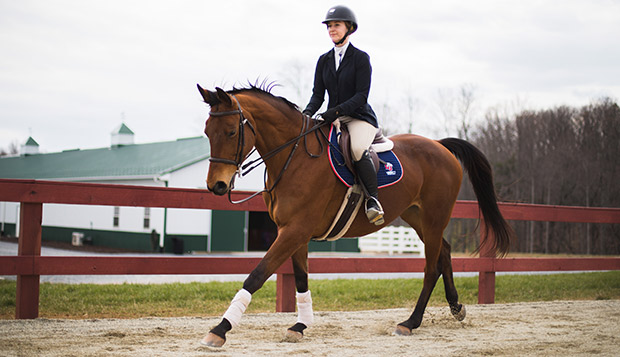 Gayheart, who returns as a team captain for the Lady Flames' Hunt Seat team after moving up to the Open Division last season, won both the Open Fences and Open Flat divisions in Williamsburg, Va., before placing first in Open Fences and second in Open Flat in Amherst, Va.

"We have a lot of new riders on the team and they have plenty of potential," Flaig said. "These were their first experiences in the show rings with a little pressure on them to give them a chance to prove themselves and they learned a lot and will continue to improve."

Liberty's Hunt Seat team will travel to Richmond on Oct. 20 for its next show at VCU before both the Hunt Seat and Western teams host a scrimmage with the University of South Carolina on Oct. 27 at 10 a.m.

"We are expecting to have six riders compete from both schools in each discipline and will probably use both rings," Flaig said. "The jumping divisions will take place in the indoor arena and the flat competition and Western horsemanship and reining competitions will be held outside."

On the next day, Oct. 28, Liberty's Western team will travel to St. Andrews University for its first show after last month's scheduled opener was postponed by Hurricane Florence.