Crew tandems tuning up for fall season debuts in Pittsburgh 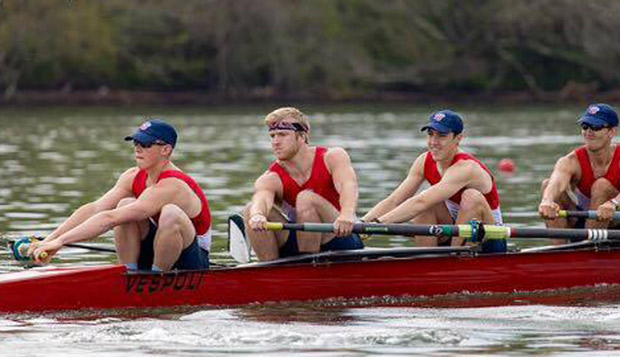 Liberty University's men's and women's teams will make their fall semester debuts at this weekend's Head of the Ohio in Pittsburgh, Pa., where the Flames and Lady Flames will enter veteran men's and women's doubles tandems into the regatta that will feature entries from 61 club teams.

Seniors Ryan Krupansky and Brad Weisman will row the men's double and christen a new skull.

"They will be racing a beautiful, brand new boat that we got last spring for the first time this weekend," Liberty Head Coach Debbie Prowse said. "They are both really strong and row really well together. They have worked so hard this fall, putting in a lot of extra training hours on the erg on their own and focusing on technique for their skulling, so it is exciting for them."

"They are doing really well getting adjusted to the smaller boat," Prowse said. "They are working hard on being efficient at the catch end of the stroke, getting the blades in the water efficiently so they don't lose momentum, and they have shown a lot of improvement."

Rowers will have their endurance tested for 5,000 meters, more than twice as long as spring season races. They will be joined by two or three more boats for the Nov. 2-3 Head of the Hooch in Chattanooga, Tenn., and the Nov. 8-9 Head of the South in Gainesville, Ga.

Prowse and Assistant Coach Kathleen Lopp, who rowed for the Lady Flames before graduating in 2017 and joined the coaching staff last season, oversee practices on Smith Mountain Lake on Monday, Tuesday, Thursday, and Saturday afternoons. The coaches also direct erg training sessions on Wednesday and Friday nights out of the indoor practice station at River Ridge Mall and Graduate Assistant Caleb Overholser coaches the team through strength and conditioning workouts at the Club Sports weight room behind the LaHaye Ice Center.

"It is a time and energy commitment and it is very mentally and physically exhausting," Prowse said.

Still, she is hopeful her current crew of 16 men and women will remain committed to the program and that mid-season recruiting efforts will bring in more freshmen rowers to train for spring semester competition.

"Our novice rowers are cruising right along, but they have a lot to learn," Prowse said. "In the erg room, we are focusing on their technique. That's what our mission is in the fall — to really hammer home proper technique, good posture, proper blade placement. We are teaching them the fundamentals of how to row properly and getting them used to the language of rowing, the terminology. They are learning to listen so that they can perform what the coxswain wants them to do together."

This fall, the crew team will offer opportunities for students to join the team for six weeks of high-intensity workouts through a rowing boot camp designed to get students in shape and introduce them to the sport. The team offered a similar learn-to-row program last spring, but Prowse wants to make the workouts more intense this time, potentially developing walk-on team members.

In the spring, the team will hold a 10th-anniversary celebration, inviting alumni back to share experiences and testimonies and to see the new boathouse facility at Smith Mountain Lake.