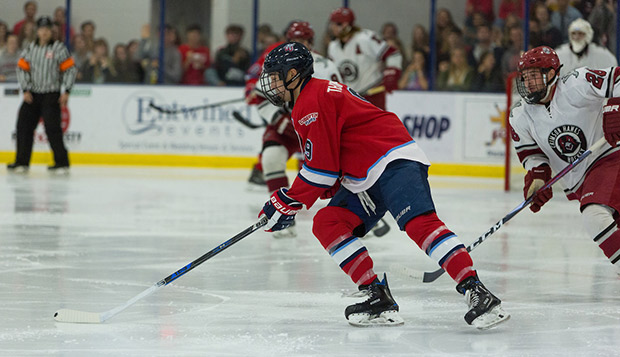 After netting four of their six goals in the third period of the series-opening "Midnight Mayhem" matchup, Liberty University's ACHA Division I men's hockey team carried that momentum into the first period of Saturday night's rematch with Indiana University of Pennsylvania at the LaHaye Ice Center.

The Flames (3-0, ranked ninth in the nation) scored three goals in the final 10 minutes of the stanza — one shorthanded, one at even strength, and one on a power play — en route to a 6-0 triumph over the Crimson Hawks (1-4-1).

"We played a better overall game tonight," Liberty Head Coach Kirk Handy said. "We got three goals five-on-five, two shorthanded, and one on the power play. We were doing a lot of good things there and it was nice to get those early goals, for sure."

At the 8:39 mark, early into an IUP power play, Liberty junior forward Andy Clarke controlled the puck behind the net and found wide-open senior forward Zak Hayes out in front for an upper-net wrist shot score.

"Zak Hayes and Andy Clarke were great for us on the penalty kill," Handy said. "Our PK was real strong tonight."

Sophomore forward Jordan Bochinski recorded his first goal less than three minutes after Hayes started the scoring. Flames sophomore forward Devin Pierce won a faceoff in the offensive zone and junior defenseman Jacob Fricks sent a cross-crease pass to Bochinski who redirected the puck inside the right post for a 2-0 advantage.

Just over three minutes after that and exactly 20 seconds into a Liberty power play, Pierce won another faceoff back to Fricks, who fired a laser from the point that beat IUP goalie Tyler Kurtz top shelf to extend the Flames' edge to 3-0 with 2:23 to play in the period.

Starting the second stanza in four-on-four action, Liberty needed just nine seconds to pad its lead to 4-0 when junior forward Quinn Ryan won the opening faceoff to sophomore forward Cole Gammer. He sent a short pass ahead to Ryan in the right crease, where Ryan chipped the puck into the top right corner of the Crimson Hawks' cage.

Liberty capped the second-period scoring with 0.8 seconds to play when Pierce won a faceoff and set up junior defenseman Matt Cruickshank for a shot from the top of the right circle. The puck glanced off the stick of junior defenseman Josh Bergen high into the air before landing right in front of Cruickshank in the left crease, where he one-timed a shot inside the right post to give Liberty a commanding 5-0 advantage.

"Cruickshank has played well for us and he's contributing on the offensive side, which is nice," Handy said. "He's working hard for us."

The Flames got their second shorthanded goal midway through the third period when Bochinski chased down a puck cleared from along the back boards by junior forward Victor Blomberg. Bochinski gathered the puck in the middle of the ice and skated in for a one-on-one with backup goalie Jared Stahel, deftly backhanding his breakaway shot through the five hole for the final score.

Liberty outshot the Crimson Hawks, 60-20, and senior goalie Josh Halpenny recorded the Flames' first shutout of the season in his first start.

The Flames will travel to Delaware next Friday night and Saturday afternoon to open Eastern States Collegiate Hockey League (ESCHL) play against the Blue Hens at Fred Rust Arena.

"We've got a veteran group of guys and they're going to know what to expect," Handy said. "We'll have a good week of practice and look forward to getting on the road. We're going to have to continue to get better this week to be able to go to Delaware and play two tough conference games on their Olympic-sized ice."