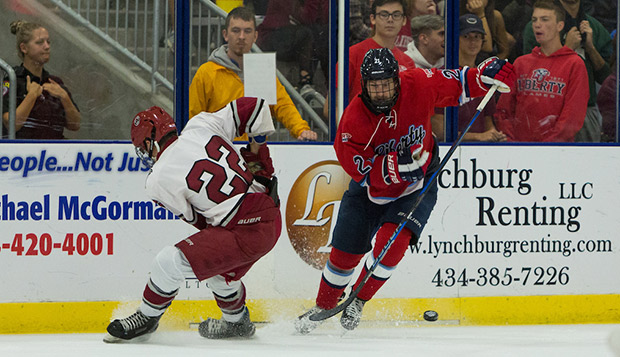 Midnight Mayhem did not disappoint a sellout crowd gathered early Saturday morning in the LaHaye Ice Center, as Liberty University's ACHA Division I men's hockey team, fueled by the energy of the Flames' fans, overcame a 1-0 first-period deficit to defeat Indiana University of Pennsylvania, 6-1.

The Crimson Hawks (1-3-1) capitalized for the game's first goal five seconds into a power play with 7:51 to play in the first period when Dominick Glavach received a pass from fellow forward Kyle Harris and fired a wrist shot from the high slot past Flames senior goalie Cole Burack inside the right post.

The Flames (2-0, ranked ninth in the ACHA) responded with fire to start the second period, scoring the tying and go-ahead goals in the opening eight minutes when sophomore forward Cole Gammer caught an outlet pass from junior defenseman Garrett Nelson near the red line and started a give-and-go with junior forward Quinn Ryan. Gammer pocketed Ryan's return pass inside the left post from deep in the left crease for the equalizer at the 19:09 mark.

"Our guys just refocused to come back out and were able to produce right at the start of the period," Liberty Head Coach Kirk Handy said.

Then, with 11:49 remaining in the second, sophomore forward Jordan Bochinski controlled a loose puck at the top of the left circle and sliced through traffic before ripping a wrist shot into the upper netting unassisted to give the Flames the lead for good.

Less than two minutes into the third period, the Flames stretched their lead to 3-1 on a crisply executed goal set up by junior forward Victor Blomberg. He skated the puck out from behind the cage to the top of the right circle and threaded a through pass to senior defenseman Matt Cruickshank deep in the left circle, where he sent a cross-crease assist to sophomore forward Devin Pierce for a point-blank finish.

Not quite five minutes later, Ryan trailed Bochinski on an odd-man rush up the left wing and converted on a power play after Bochinski dropped the puck back to him, extending the Flames' advantage to 4-1. With 6:30 remaining in regulation, Liberty padded its lead to 5-1 on a beautiful feed from Nelson to Ryan in the left crease for a one-timed, top-shelf score. Ryan received a chipped outlet pass from junior defenseman Jacob Fricks and completed his third-period hat trick with 2:22 to go by weaving through traffic through the middle of the ice and lifting a spectacular bar-down wrist shot from inside the right circle.

"My teammates did most of the work for me on all of those goals. I just was able to put them in the back of the net," Ryan said. "Everyone played well, everyone was buzzing, so everyone contributed tonight. We have four solid lines and we definitely don't have any weak links."

Liberty outshot the Crimson Hawks 58-13 for the contest with Burack making 12 saves to keep his goals-against average at 1.00 through two games.

Overall, Handy was pleased with the Flames' intensity and execution as the game progressed.

"It's encouraging that our third period was our best period again tonight," he said. "I like the fact that we're doing a lot of things right, but there's still another level that we have to get to and we're going to keep moving forward each game. We're early in the year and we understand that. It's about us continuing to grow as a team this year and continuing to get better each and every time we're out there."

Liberty and IUP will do battle again Saturday night back at the LaHaye Ice Center, where the puck drops at 7 p.m. 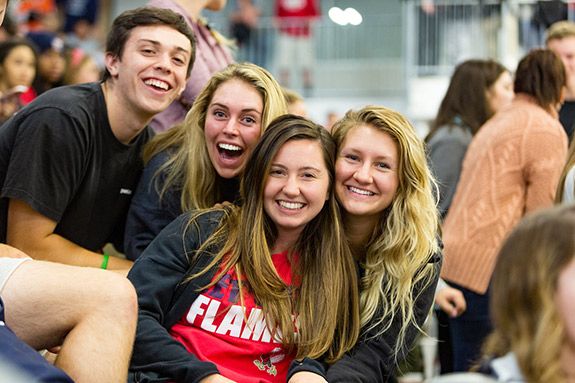 Flames fans came out in droves for the only 'Midnight Mayhem' matchup of the 2018-19 season, early Saturday morning at the LaHaye Ice Center.