DI women shut out by Eagles, who salvage split in Chicago 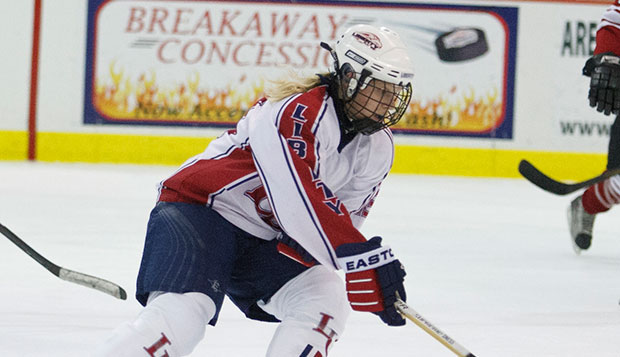 A night after posting a shutout of host Robert Morris College, Liberty University's Divison I women's hockey team, ranked No. 1 in the ACHA poll, was shut out by the fourth-ranked Eagles on Saturday night to come away with a series split in Chicago.

The Eagles outshot the Lady Flames 29-28 in the contest.

"It was pretty even," Bloomfield said. "They're a good team. Sometimes, they don't show up to play. Tonight, they just wanted it. They were chippy, which started in the third period last night. They got some penalties, but we just couldn't capitalize."

Rupp made 28 saves on the night, keeping the Lady Flames in the game.

"Sam probably did the best job of all the girls on the weekend," Bloomfield said. "She had a really good weekend in goal."

For the Lady Flames (18-2), it was their first defeat since Nov. 16, a 4-1 setback to Minnesota, which is currently ranked second.

The season's final ACHA rankings will be released next Sunday night, with No. 3 Rhode Island, which took two out of three games from Robert Morris last week, likely to replace Minnesota at No. 2 since the Gophers don't play enough games.

Liberty is off next weekend before hosting Colorado State for a three-game series in early February.