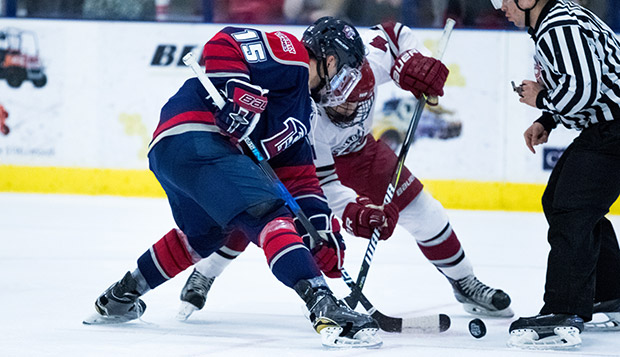 Sophomore center Ryan Cox will clash with IUP this weekend as he did last December. (Photo by Nathan Spencer)

Ninth-ranked Liberty University's ACHA Division I men's hockey team will be burning the midnight oil this weekend in the LaHaye Ice Center. For the third season in a row, the Flames will face off against Indiana University of Pennsylvania in a "Midnight Mayhem" matchup, set for Friday at 11:59 p.m.

"It will be crazy," Liberty Head Coach Kirk Handy said. "That's the way that we love it, though."

Liberty is 4-1 in midnight games over the past three years, winning both last season, including a 9-2 triumph over the Crimson Hawks in December.

"We are super excited for that Midnight game," said sophomore forward Cole Gammer, who scored two of Liberty's three goals in last Friday's season-opening victory over Penn State, played in front of a near-capacity College For A Weekend (CFAW) crowd. "We're going to treat every game this season like it's our last and that's how we're going to be successful."

Liberty Scouting Report: Two Coles made the difference for the Flames in their season-opener against Penn State — Gammer and senior goalie Cole Burack (1-0, 1.00 goals-against average, 94.4 save percentage). Burack was tested repeatedly by the Nittany Lions, making a few exceptional saves to preserve a scoreless tie through the first two periods despite a number of PSU power play opportunities.

IUP scouting report: After splitting their season-opening home series with former ESCHL member West Chester, the Crimson Hawks are coming off one-goal losses at Canisius (4-3 on Friday) and Buffalo (3-2 on Saturday).

IUP returns two of its top forwards in Vinny Casale and Michael Longhitano and defenseman Gavin Cummings, who is tied for first in scoring with Tyler Speis and Kyle Harris at three points apiece through four games.

All-Time Series: Liberty holds a 6-0 advantage over IUP in a series that only spans the past three seasons.

Coaches: Handy is in his 19th season as head coach of the Flames and has compiled a 406-172-26 record. Joe Ford is in his fourth season as the Crimson Hawks' head coach and has a 38-42-6 overall mark to date.