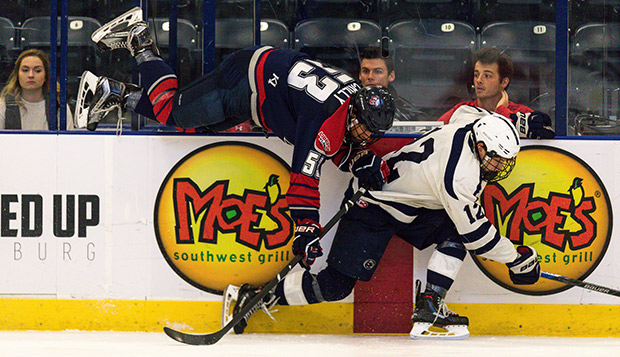 Liberty University's ACHA Division II men's hockey team opened its season with three tightly contested games over the weekend at the LaHaye Ice Center. The Flames held on for a 3-2 victory over UNC Charlotte late Friday night before being swept by Penn State, 3-1 on Saturday afternoon and 3-2 on Sunday.

"We have 11 freshmen and our inexperience showed at times, but we are excited that we got to play a good team early on so that guys can see what it takes to be the best," Flames second-year Head Coach Ben Hughes said.

In Friday's opener against UNC Charlotte, sophomore center Michael Niederer scored Liberty's first goal on a putback in the right crease less than four minutes after the opening faceoff.

Andrew Miller cut the deficit in half at the 3:20 mark with a rebound of his own blocked shot, and then UNC Charlotte knotted the contest at 2-2 when defenseman Ryan Burke launched a shot from the red line that snuck past sophomore goalie Andrew Partridge with 1:28 left in the second period.

Freshman center Timothy Doe scored his first goal as a Flame on a shorthanded opportunity six minutes into the third period to give Liberty the game-winner.

After a scoreless first period Saturday against Penn State, the Nittany Lions ended the stalemate when Stefan Horgas converted a putback past sprawling Flames freshman goalie Dakota Cyhaniuk early in the second. Penn State's second score was tipped into the top right corner of the cage by Mark Gilbert.

The Flames capitalized on a power play to make it a 2-1 contest less than three minutes later when senior forwards Eric Masters and Drew Crilly worked the puck through the offensive zone to set up freshman center Joseph Nash for the fast-break finish.

However, PSU put the game out of reach with a power-play goal in the final 3:44 when Nico Gricco put away a cross-crease assist from Jay Furst.

"They outshot us, they won more faceoffs, and we had more turnovers," Hughes said. "We need to learn from our mistakes and continue to get better."

Freshman center Johnny Kettelle put the Flames on the scoreboard just over five minutes into Sunday's rematch, slamming home a putback of Roy's shot from the high slot. But the Nittany Lions tied it back up on Bobby Freiling's shot from the inside edge of the right circle two minutes later and Frederick Monkman chipped in the go-ahead goal two minutes after that.

Freiling finished Gricco's feed from behind the net for a 3-1 advantage two minutes into the second period before the Flames capped the scoring with 11:55 left in the third on a redirect by freshman forward Darren Carter in front, tipping in a shot by Roy from along the right boards.

"We did a little better in each category on Sunday," Hughes said. "We shot the puck more and had fewer turnovers and we got better each period. It was a good experience moving forward for the rest of the year."

The Flames and Nittany Lions will meet again on neutral ice on Oct. 6 when they travel to compete in a DII Showcase at Louisville, in between Liberty's games against Indiana on Oct. 5 and the host Cardinals on Oct. 7.