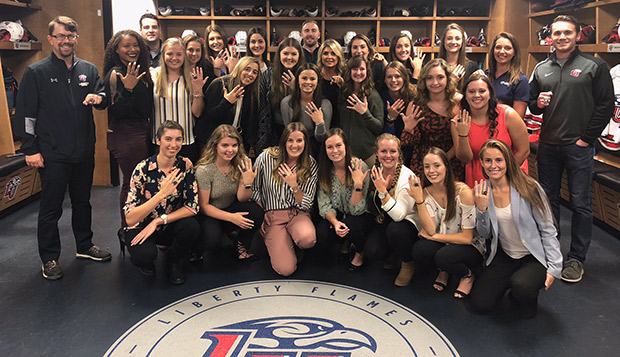 Players and coaches from Liberty University's ACHA Division I women's hockey team received their national championship rings on Friday and were honored between periods at the DI men's hockey game played that night at the LaHaye Ice Center. The Lady Flames won their second national title in four seasons by defeating Adrian on March 18 in Columbus, Ohio.

Liberty swept a two-game series against the Carolina Lady Hurricanes on Saturday and Sunday, completing their five-game exhibition schedule at 5-0.

"It was neat to get back together and fun to reflect and to celebrate what we accomplished last season," Liberty second-year Head Coach Chris Lowes said. "The majority of our team had family that came into town to be there, so it was a special moment for the girls to get those (rings) before finishing up our preseason and looking toward to our regular season."

Just over eight minutes into Saturday's opener, junior forward Tiana Lisle finished a putback of a shot from the point by graduate defenseman C.J. Tipping. A minute later, sophomore forward Danica Polson intercepted the puck in the offensive zone and skated in for a top-shelf wrist shot to stretch the Lady Flames' lead to 2-0.

Less than a minute into the second period, senior forward Lauren McDonald chased down an outlet pass from Polson on the left wing, cut back, and tucked the puck under the Carolina Eagles goalie for a 3-0 advantage. Junior forward Alex Smibert finished a cross-crease feed from McDonald to stretch the lead to 4-0 at the 12:11 mark of the second period. Two minutes later, sophomore forward Shelby Bradford assisted junior Vanessa DeMerchant on a three-on-one break for a 5-0 lead before the Lady Hurricanes converted their only goal of the weekend on a breakaway opportunity by Katherine Murphy with 7:25 left in the second period, sneaking the puck past Liberty junior goalie Nadia Rupoli.

Bradford capped the scoring early in the third period by cleaning up a loose puck left out in front of the open cage.

Liberty outshot Carolina by a 54-21 margin in Sunday's rematch and freshman goalie Megan Peterson posted her first shutout for the Lady Flames, who had 10 different goal scorers in an 11-0 victory.

"They have some girls that played at high levels in college and even in professional ranks, so they have some talent, but we have a full team that's polished on the ice and things went our way," Lowes said. "We have seven new players, and that is why we play these exhibition games — to come together as a team, gain some confidence, reintroduce systems and game planning, and to get in shape. We still have a lot of work to do as we make strides over the course of the season, but … I think we are in a good spot."

Liberty will open defense of its ACHA DI national championship with a three-game series against Lindenwood (Ill.) Belleville over the weekend of Oct. 5-7 at the LaHaye Ice Center.