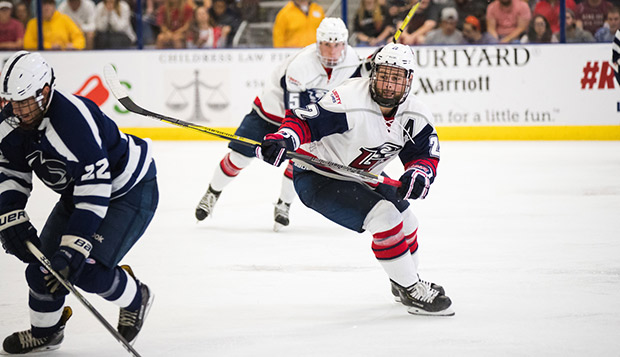 Fire on ice returned to the LaHaye Ice Center as Liberty University's ACHA Division I men's hockey team opened its 2018-19 season with a 3-1 triumph Friday night over Penn State in front of a fully charged College For A Weekend (CFAW) crowd.

"I absolutely love playing in front of this crowd," said sophomore forward Cole Gammer, who scored the Flames' first and last goals on the night. "We just have an unreal campus that loves its hockey and it makes it a really fun atmosphere to score goals in."

Liberty Head Coach Kirk Handy said the energy produced by the fans helped set the tone for what promises to be a thrilling season.

"That makes the experience, from a student perspective and a student-athlete perspective, that much better," he said. "It was a wonderful environment tonight and a great entertaining game to watch."

Senior goalie Cole Burack made 17 saves to extinguish the Nittany Lions' attack in Liberty's first matchup with Penn State in more than five years. None was more critical than a lunging kick save near the left post of a shorthanded breakaway opportunity by Penn State forward Adam Alavi less than a minute into the second period of a game deadlocked at 0-0.

"Cole played well," Handy said. "Penn State only took 18 shots, but it had a lot of good opportunities tonight and with nine power plays, Cole had to be sharp."

Both teams killed their share of power plays in the first two periods, which featured 11 penalties. The Flames finally capitalized on a man-up chance with 11:12 left in the second period when Gammer received a pass from junior linemate Quinn Ryan along the left backboard. He skated through traffic across the left endline before threading the puck between the pads of Nittany Lions netminder Will Holtforster, snapping the scoreless tie and bringing the fans to their feet.

The Flames picked up back-to-back penalties early in the third period, putting Penn State on a five-on-three power play for a minute-and-a-half stretch. But Liberty emerged unscathed, gaining a boost of momentum that led to its second goal.

"(Senior forward and alternate captain) Zak Hayes played really well and hats off to our PK tonight," Handy said. "That was a big, big part of our game."

At the 13:55 mark of the second period, junior defenseman Garrett Nelson sparked a 2-on-3 break up the center of the ice before sending the puck over to sophomore forward Jordan Bochinski for a slap shot from the top of the left circle that sneaked past Holtforster into the upper netting.

The Nittany Lions cut the deficit in half with 4:24 remaining in regulation by capitalizing on a man advantage after Flames defenseman Chaydan Lauber was called for roughing in front of his own cage. Defenseman Stefan Horgas dug the puck out of the right corner and found Ambrose Aquadro open in the high slot, where he slipped his shot past Burack.

But Liberty struck back a little over a minute later when junior defenseman Matt Cruickshank skated the puck behind the Nittany Lions' net and set up Gammer with a perfectly placed pass for a one-timed finish out front, extending the lead back to two goals with 3:06 to go.

Liberty will return to LaHaye next Friday night for its "Midnight Mayhem" matchup against Indiana University of Pennsylvania (IUP, its ACHA DI opener starting at 11:59 p.m).

"It will be crazy," Handy said. "That's the way we love it, though. It will be midnight madness and we are looking forward to it. We have to refine our game and regroup next week and be better next weekend." 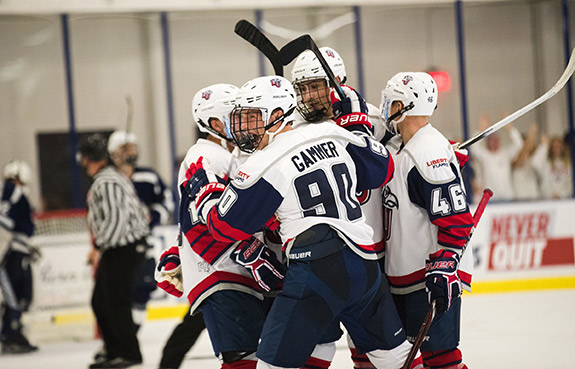