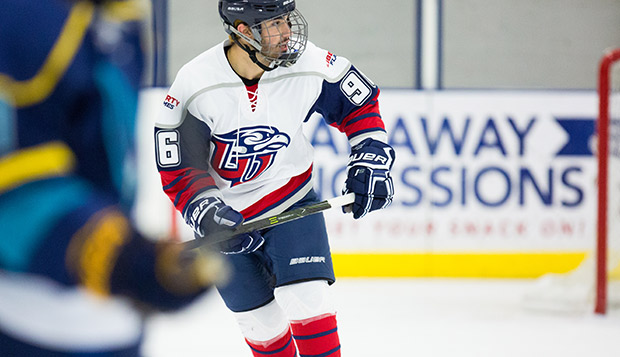 T.J. Moores, a sophomore from Ontario, will pair up with senior captain Dillon Brown on defense. (Photo by Andrew Snyder)

"We had a lot of good recruits at the skate, so it is nice to see that recruiting paying off for the program," Flames Head Coach Jared Smith said. "Some of the newer guys have a ton of talent, so we will see how well they can transfer it into a game this weekend."

Liberty opens its 2018-19 season Saturday at 1 p.m. against the University of Richmond at the LaHaye Ice Center. After playing as an independent program the past two seasons, it will mark the Flames' debut in the new East Coast Collegiate Hockey Association (ECCHA), which includes the Spiders as well as UNC Wilmington, Coastal Carolina, and Christopher Newport.

The ECCHA is a revamped version of the Blue Ridge Hockey Conference that Liberty competed in through 2016.

Games originally scheduled for Oct. 5-6 at Coastal Carolina may be relocated due to flooding from Hurricane Florence that affected that area near Myrtle Beach, S.C.

Smith is eager to get his first season at the helm underway after serving the past four seasons as assistant coach under Rett McGibbon, who was his coach as a forward for the Flames from 2009-11.

"I'm very excited," he said. "They guys have been gelling really well, and everything's been flowing in practice. It's all about transferring it to when the pressure's on in a game."

Senior defenseman Dillon Brown is back as Liberty's head captain with graduate student and forward Kyle Jassmann the alternate captain.

"We do have a lot of speed and one of our team strengths is our depth," Smith said. "Judging from practice, our offense seems to be pretty well balanced. We don't rely on one or two lines. We can rely on all four, whoever's got the hot hand."

Defensively, Brown will be matched with sophomore T.J. Moores, while sophomore Thomas Kazmierczak and senior Jeremy Barstead will form another strong pairing.