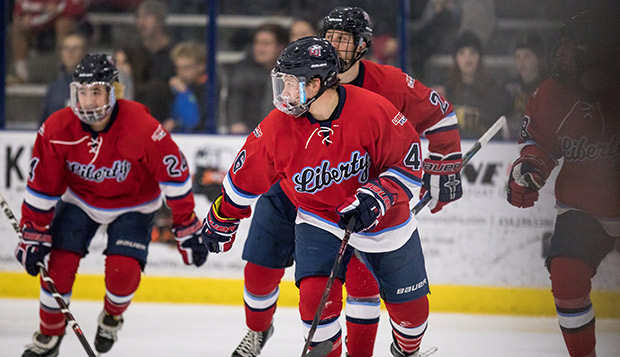 When it opens its 2018-19 season Friday at 7 p.m. in the LaHaye Ice Center, Liberty University's ACHA Division I men's hockey team will face off against a Penn State program that won a record five national titles as well as three ESCHL regular-season crowns before moving up to the NCAA Division I ranks in 2012. The Flames ended the Nittany Lions' streak at 10 consecutive ACHA DI national championship game appearances by upsetting them in the quarterfinal round of the 2008 tournament.

Flames Head Coach Kirk Handy wants to make sure the Flames bring their A game and come out on fire for 60 minutes Friday night, playing in front of a College For A Weekend (CFAW) crowd.

"We want to be relentless in the way that we play," he said. "Our guys are progressing well. What matters is how well prepared we are to play and how we execute our new systems, which is very important early on."

Liberty Scouting Report: The Flames lost their top two scorers from last season — forward Grant Garvin, who led the ACHA with 25 goals and 49 assists for 74 points, and defenseman Zane Schartz (23G, 36A, 59 points, ACHA-leading 14 power-play goals), who re-signed with the ECHL's Norfolk Admirals over the summer.

Liberty features more than enough firepower to pick up the slack on attack, from the likes of junior forwards Brock Thompson (23G, 26A) and Quinn Ryan (14G, 35A), sophomore forwards Cole Gammer (16G, 31A) and Jordan Bochinski (15G, 16A), and sophomore center Devin Pierce (10G, 8A).

"Up front, we like our depth and size and skating ability," Handy said. "We will be fine-tuning for the first few games to make sure we have the right line combinations."

Junior forward Andy Clarke returns to the team after spending his sophomore season as a captain on the DII squad.

"Andy will be a stabilizing figure for us in the center ice position," Handy said. "He's a leader."

Coaches: Handy enters his 19th season as head coach of the Flames and has compiled a 405-172-26 record. Cory Myers is starting his second season with the Nittany Lions after leading them to a 24–5-1 record last season.