McCombe's hat trick the difference in Flames' 4-1 win at W.Va. 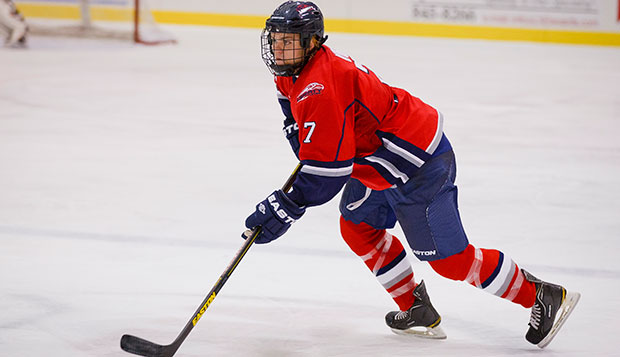 Ryley Egan added a goal and two assists and Jackson Kuhn assisted McCombe's last two scores as Liberty (18-9-2) extended its winning streak to four games, all on the road.

Over the past 11 games, the Flames are 9-1-1, including last Thursday's 4-3 shootout loss at Arizona State, the top-ranked team in the ACHA.

McCombe's last two goals came off power plays and padded the Flames' 2-1 lead. He moved into fifth place on the team in scoring with 21 points and now ranks third behind Rick Turner and Egan with five power play goals.

McCombe opened the scoring off Egan's first assist before returning the favor by distributing the puck to Egan after winning a faceoff on the offensive end.

"That was a seeing-eye goal on a shot from the wall," said Liberty assistant coach Jeff Boettger, who was filling in for Kirk Handy, who's wife had their fourth child on Thursday. "That was a real nice one to get right off the draw, with 35 seconds left in the first period."

West Virginia forward Shayne Wilson cut the deficit in half just a minute into the second period, during which the Mountaineers outshot the Flames 22-6.

"They played us tough," Boettger said. "They came out ready to go. Even though we went up 2-0 in the first period, they were very physical and it was really a battle. But we weathered the storm with our patience and persistence."

Though the Flames had technically superior stick skills, WVU (6-14) used physical play and some scrappy stickwork to stay in the game.

"They were hooking and slashing to try to keep up with us and slow the game down," Boettger said. "They did a very good job of playing to their strengths and they made us work for the game. I challenged the guys to be really disciplined and to fight the uphill battle."

McCombe answered the Mountaineers' lone goal with his first power play score less than three minutes later off assists from Turner and Kuhn. He completed his hat trick with seven minutes left in the third period off feeds from Egan and Kuhn, whose one-touch pass set McCombe up at the top of the circle for a shot into the upper right corner of the cage.

For the game, WVU held a slim 35-34 shot advantage but Clayton Brown made 34 saves in goal for the Flames, who were playing without a couple regular defensemen and sophomore forward Lindsay LeBlanc.

After the mental letdown in the second period, Liberty tightened its offensive and defensive systems and its focus in the third to close out the sweep.

"At times, (the defense) was definitely a lot better," Boettger said, noting freshman Kyle Miller stepped up and made some good decisions on the defensive end. "We played very effectively in the defensive zone. But the game comes and goes and we've got to learn to adjust in the momentum shifts."

Liberty returns to the LaHaye Ice Center for the first time since Dec. 8 for an in-state rivalry match against Virginia Tech, set for 4 p.m. Sunday.

"Any time you play Virginia Tech, we always have a fantastic crowd and it's an exciting crowd," Boettger said. "We definitely like the atmosphere and enjoy playing them."