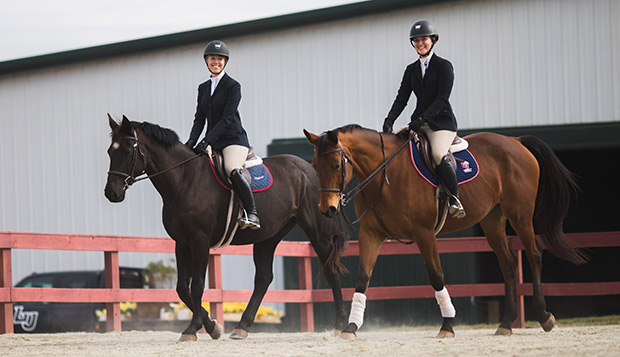 Senior Kendall Burdette and junior Amber Gayheart return to serve as captains for the Hunt Seat team this season. (Photo by Leah Seavers)

Eleven riders from Liberty University's Hunt Seat equestrian team will travel to Williamsburg on Saturday to compete in the first IHSA Region 4 competition of the season, hosted by the College of William & Mary on Sunday.

After finishing runner-up to Sweet Briar College in last season's Region 4 standings and narrowly missing a team bid to the Zone 4 competition, the Lady Flames riders will seek to start out on the right foot in the one-day show that will feature riders from the host Tribe and visiting Vixens as well as Mary Washington, Randolph-Macon, Christopher Newport University, VCU, Longwood, Richmond, and ODU.

"We will find out a lot about our new riders and what the other schools have as far as competitiveness,"  Liberty Hunt Seat Head Coach Suzanne Flaig said. "We are feeling confident in our riders' abilities going in. The level of riders and their mental preparation is excellent. We have to get better as the season progresses, but we are off to a good start."

Flaig kept 18 riders on her roster in addition to three who compete for both the Hunt Seat and Western team, led by first-year Head Coach Madeline Shrode.

Senior Kendall Burdette and junior Amber Gayheart return to serve as captains for the Hunt Seat team while juniors Brianna Bass and Madeleine Temple are co-captaining the 15-member Western squad.

"The returning riders have come back very driven, very disciplined," Flaig said. "We have structured practices in a way to prioritize goal setting and our captains have been great leaders."

The Hunt Seat team will host a scrimmage with the University of South Carolina on Oct. 27.

"USC has a varsity program, so it will be a great opportunity for our riders to compete at a high level," Flaig said.

The Lady Flames will also put on a Region 4 show on Feb. 9 before concluding their regular season at Mary Washington on Feb. 16-17 and at the Region 4 Championships at Sweet Briar on Feb. 23.

The Lady Flames should have all divisions but reining represented at their first show, with freshman Savannah Graves riding in horsemanship before moving up to the reining division for their second show.