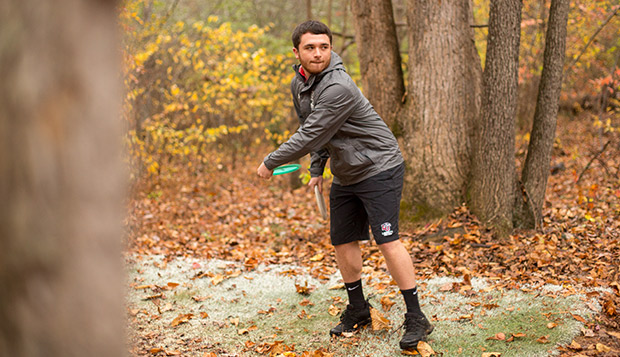 Zach Biscardi returns for his senior season but is recovering from a shoulder injury that will limit his tournament play. (Photo by Kevin Manguiob)

A sign of how far Liberty University's disc golf program has come in the eight years Steve Bowman has served as its head coach is that he is now receiving interest from prospective student-athletes who are freshmen and sophomores in high school.

"These are really good, highly rated players, who want to come to Liberty and get to the next level," Bowman said.

"Of the eight guys coming back, I am excited for their enthusiasm to make the program stronger," Bowman said, "The core guys are all super competitive and they are all pushing to make each other better. There is not a lot of separation between the championship and first flight teams right now."

The Lady Flames have three players back, including senior Hannah Trotz who started on their first National Collegiate Disc Golf (NCDG) women's championship last spring, and have added a few more.

By winning the national title, Liberty's women's top team automatically qualified three men's and two women's foursomes to compete at this season's championships, set for April 3-6 in North Augusta, S.C. To tune up for that event, the Flames and Lady Flames will compete in the Tri-State Challenge, which is expected to grow from six teams to as many as 10 when it is held in late March.

"We are trying to build a conference and the Tri-State Challenge will eventually become our conference championships," Bowman said. "There are a lot of schools that are excited about it."

In addition to practices outdoors and in the Liberty Indoor Practice Facility, the men's and women's players have endured rigorous mental and physical training and conditioning in preparation for the team's first appearance in the Southeast Collegiate Open, a 12-team tournament near Augusta, Ga., on Oct. 27-28. Liberty will conclude the fall schedule by hosting the Flamethrower Invitational, a national qualifier from Nov. 3-4 on its two 20-hole courses on East Campus and near the Hydaway Outdoor Recreation Center.